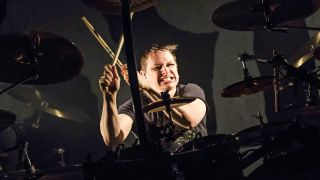 They may be more than two decades in, but Korn are showing no sign of slowing down.

The nu metal pioneers have just hit top 10 charts around the world with new album The Serenity Of Suffering and now they're on the promotion trail with a UK tour coming next month.

It's not just any old tour, either. This run sees Korn and Limp Bizkit join forces for six arena shows. Starting on 12 December, the two icons of metal will head through Manchester, Glasgow, Birmingham, London, Cardiff and Nottingham.

As if we needed to whet your appetite any further, check out this incredible drum cam footage from Korn's Ray Luzier as he motors through Rotting In Vain, lead single from their new album.

DON'T MISS: In the studio: Korn talk The Serenity Of Suffering

When we recently spoke to Luzier he was pretty darn pleased with The Serenity Of Suffering had turned out.

"I have this piece of crap speaker like an old radio that I carry around with me and this album sounds great on that," he said. "Then you put it on a huge sound system and it makes your teeth shake, the sonics are insane."

Want some more Luzier drum cam? Here you go! Check out this Vic Firth clip of the drummer playing through Korn's Insane.