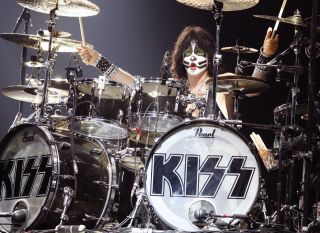 Out come the Catman's claws

A battle of the KISS drummers is brewing, with current incumbent Eric Singer biting back after harsh words were directed at him in Peter Criss' autobiography.

Speaking to Rock Music Star, Signer said of the former KISS man's book: "You've gotta remember, this is Peter's chance to get some more attention for himself. Because, he really hasn't done much since he's been out of KISS.   "Obviously, Peter has his point of view on his time and his experiences, on what he feels and how he feels about his time in KISS, and all of the players that are all part of it."

Singer also voiced surprise at being singled out for criticism by Criss, saying: "Peter doesn't know me. Peter's met me a couple of times, through all the years that I've been around. It was literally like, 'Hi. How ya doin'?' Other than when we did 'MTV Unplugged', where we were at rehearsals on and off together, that one week, other than that, Peter does not know me. He doesn't know my character. He doesn't know what type of person I am."

Criss recently released his autobiography, titled Makeup To Breakup, in which Singer is described as a 'schlep.'