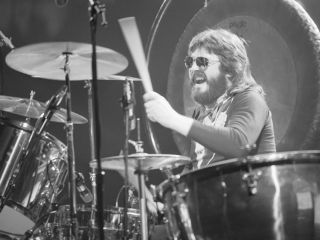 Nicko McBrain and Carmine Appice have been confirmed as co-hosts for the all-star 2013 Bonzo Bash, while the likes of Mike Portnoy, Ray Luzier and Jojo Mayer will perform on the night.

The event, held at The Observatory in Anaheim, California on 24 January, sees a stellar cast of drummers jump up on stage with house band The Moby Dicks (featuring Whitesnake's Michael Devin, Brian Tichy, Stephen LeBlanc, Chas West and Brent Woods), with each sticksman playing through a Led Zeppelin track of their choosing on a specially-made by Natal Drums Bonham replica kit.

And these aren't any old drummers getting on stage, the line-up is utterly staggering, just checking the full list below;

The show is the brainchild of former Whitesnake drummer Brian Tichy. He said: "Bonzo Bash is a drummer's playground. There's plenty of toys and our parents taught us to play well with others!"

This year marks the fourth time that the show has been staged. It is once again put on in conjunction with Natal Drums. For more on tickets head here. To get involved with the Bonzo Bash Facebook page click here.