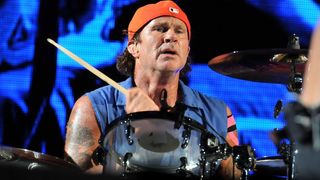 Drummers the world over, rejoice! It seems that even the biggest drum stars get frustrated over missing out on gigs.

In the brand new issue of Rhythm, Chad Smith tells us all about his longstanding working relationship with producer Rick Rubin. The pair have worked together on records by everyone from Jake Bugg to the Wu-Tang Clan. But one Rubin-produced album that you won't hear Chad on is Black Sabbath's Bill Ward-less 13.

Discussing not getting the call for the sessions (the gig instead went to Brad Wilk of Rage Against The Machine/Audioslave fame), Chad says, "I think every drummer is bummed they didn't get to play with Black Sabbath. It's a shame that Bill Ward didn't, for whatever reason - and I don't know and I won't even conjecture. It's unfortunate when any band like that and the original members get back together, and for whatever reason they can't work out. I think Brad did a great job. I'm really happy for him. I love Brad - awesome drummer."

For much more from Chad pick up the November issue of Rhythm.