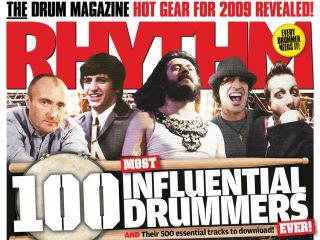 The late drumming legend topped the 100 Most Influential Drummers Ever list, beating the likes of Led Zep's John Bonham and The Beatles' Ringo Starr in the process. The poll was conducted by our friends over at Rhythm magazine, who grilled over 50 professional drummers and contributors for their top picks.

Apart from pipping the 'perennial-poll-topper' John Bonham to the post, it's no great surprise to see Buddy Rich at the top. He was well known for his virtuoso technique and speed, accompanying the likes of Frank Sinatra, Ella Fitzgerald and Louis Armstrong throughout his illustrious career.

Even fellow jazz legend and Rhythm's third-placed sticksman Gene Krupa referred to Rich as "the greatest drummer ever to have drawn breath." High praise indeed.

Top 10 Most Influential Drummers Ever

You can check out the full 100 in the current issue of Rhythm magazine (issue 160), which is on sale right now. Let us know what you think of the list by adding a comment below. We'll let Rhythm's editor Phil Ascott explain why he, for one, is more than happy with the top selection:

"From Warren 'Baby' Dodds in the 1920s right through to today's pioneers such as Jojo Mayer and Brann Dailor, the poll provides a fascinating overview of the development of drumming over the past century. Buddy deserves his place at the top for taking drumming to a whole new level of virtuosity. His hand speed and control were incredible and he was one of the greatest improvisers ever. He remains an inspiration for drummers of all ages and styles."