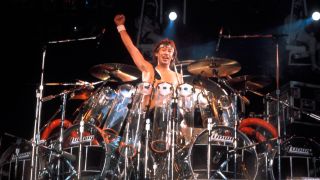 There are few rock drummers with a sound and approach as unique as Alex Van Halen. But, while there are plenty of moments to choose from as highlights, the breathtaking, herta-fuelled, toms-and-double-kick shuffle intro of 'Hot For Teacher's' is as good as it gets.

Here, even in the usually reverb-soaked ’80s, he avoids the new larger-than-life digital processing in favour of something that as a result still sounds fresh.

Then there’s the drumming which displays some serious speed and fluency but blended perfectly with originality and creativity. Okay, we’d heard double-bass rock shuffles before; on Billy Cobham’s ‘Quadrant 4’ and Simon Phillips’ ‘Space Boogie’ for example.

But on 'Hot For Teacher' Alex used it in an up-tempo rock context with punishing accuracy. The result was something that had the rock drummers of 1984, before the widespread use of double pedals, pulling two kits together to emulate the sound.

Alex gets plenty of use out of hertas, played over the barline during the intro. The ride pattern played during the intro and guitar solo is also worthy of note as Alex plays the first two partials of the triplet on ‘1’ and ‘3’ and since the feet are filling in the third partial, the ear is fooled into thinking the ride is playing triplets.

From a time when it’s hard to tell many rock drummers apart, with generic four-piece kits and digital recording homogenising their performances, Alex always stands apart – his sound and playing exemplify the benefits of pursuing your own identity and defying convention in order to allow something truly unique to be created.