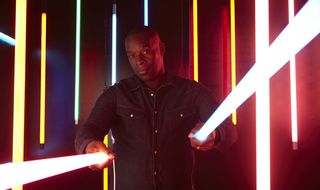 DJ EXPO 2014: Kevin Saunderson is one of techno's most well-respected DJs. Hailed as an originator of Detroit techno with the Belleville Three, Saunderson has enjoyed a vast career studded with highlights including the wildly popular Inner City.

With so many budding DJs joining the MusicRadar readership, we are looking more to the founding fathers and originators of music to find out how they made it. Saunderson's success has been the result of incredibly hard work coupled with a little bit of luck and a touch of being in the right place at the right time.

How could that inspire you? As the former football player turned DJ and record label owner advises, "Go with your vision, do your thing and work hard." Here's a little of how Saunderson did just that...

With the Belleville Three, you're hailed as one of the originators of techno, specifically Detroit techno. For the uninitiated, how would you define Detroit techno, and who would you say are its most influential artists?

"I think Detroit techno is a vision using an electronic tune to make music, dance music that contains a 4/4 beat. Detroit techno seems more experimental with effects, edits and a little higher tempo as far as BPM. We broke the music from a DJ perspective of Detroit techno. DJs play their music, or other Detroit artist music as DJs, and we started putting this music out on our record label.

"It gave it a unique difference to other producers who were doing music previously in the 70s and stuff like that. Artists outside of me, Juan [Atkins] and Derrick [May] are Jeff Mills, Mike Banks and Carl Craig. These are some of the early artists who were important in the beginning. People caught on to what we were doing and kept elevating the scene in a different way in Detroit."

Casting back to your early career, what was so inspiring about your friends Derrick and Juan creating Let's Go that made you want to make music?

"I was from New York and I used to go back every summer. I started going to the Paradise Garage so my perspective was a little different, but there was a connection. Juan came up with this sound called techno when we were all going to high school. After high school, when I found out that they were using these tools to make this music I was like well, 'Man, I think I can do that too.'

"So just being around Juan and Derrick - especially Derrick who was always pushing the limits and bringing people around each other musically - I was around a lot of talented guys who were doing the same thing so I became my own person with that."

When first trying to break into the scene, did you ever feel as though it wasn't going to happen for you? Or have you always been a positive state of mind guy?

"I was very fortunate when I broke onto the scene. I went from playing football right into playing music, and I was around Derrick right in the beginning before things really started to take off. The reality is that Derrick had a big show on radio called Street Beat. Nobody knew it was him - he was just mixing on the radio. I didn't even know he was back in Detroit and then he called and says, 'Hey, man, I'm living back here' and he said that he's been making a show called Street Beat and that he was going to get some more hours.

"At that time, when me and Derrick were communicating, I'd already started DJing and had hooked up with friends of Derrick's - Artpaint and Keith Martin. I was around a cool bunch of people already. Me being the athlete that I was, I was competitive. There's nothing I feel I can't conquer, even though there are things I probably can't, but in my mind I can conquer anything.

"I practised and Derrick had four or five hours that he needed help with on the radio. He knew I was a go-getter and even if I wasn't great at that time, he knew I would become very good at what I was trying to achieve. He put me on his radio show and that was my first real opportunity. I was doing Derrick's mix show twice a month so I faced a different type of challenge - I worked to get to a level."

What advice can you give new DJs looking to make a name for themselves on the techno scene? Especially those looking to build a fanbase.

"I don't chase other sounds when I make a record. I find ways to be inspired by stuff and find a way to make it unique. Even with my label, if I like it I'll release it. Go with your vision, do your thing and work hard."

Do you prefer being in the studio or playing live?

"I like a split. You make records in the studios and you want to get it out as a DJ and test it out. When you play out, you feel like you hear something different that should be added to the record. It's good to create them, it's great to play them, and obviously DJing is sometimes easier than making them.

"Sometimes you get roadblocks when making music - technology, errors. Most of the time DJing, you're playing your music and the music of other artists that you think is great. There's a place for both in my heart."

What gear do you have in your current studio setup?

"My studio is quite basic these days and I don't have all the analogue stuff like I had back in the day. These days I use Ableton and Native Instruments. I work on a Macbook pro, I have a tower in the studio and its where the software is based currently.

"Back in the day, when I was first making music, I was using hardware. I only used the sequencer for a little bit and I went right into using Dr T software and a Commodore 164 computer; moving with technology because I was so mesmerised by what you could do with it.

"It took a while to get to this point. People who make music now have no clue. I still love it all. There's no right or wrong."

Looking back over your career, what have been the highlights for you?

"In Detroit and getting the opportunity to play on the radio. Ron Hardy, Frankie Knuckles in Chicago, the Power Plant... They were all highlights because they were pivotal in leading me in this direction. Setting up my record company, KMS, which allowed me to put out my music. Inner City, too - I always wanted to do a vocal record - and going to Ibiza for the first time in 1991 and seeing what the island was like.

"Also, going to Australia and Sydney [in the late 1980s] with Inner City and playing in a warehouse in front of 40,000 people. It was sick."

With an eye to the future, what are you hoping to achieve next as a DJ and with your record label?

"I've got a few things I'm working on for the future. KMS is putting out a lot of different artists including my son, Dantiez Saunderson. My kids are well involved with the label and making music, remixes, and working with Dim Mak records. There's a new single called Bad Girl coming out and another called The Love I Have.

"Inner City are working on an album, and I'm working on a Kevin Saunderson EP for edancer, which is tougher and moody. I also have a showcase starting at one of the Detroit festivals called Origins. We have a new track coming out from Rick Brown and another artist called Kill Cassette. We have a lot happening on KMS. It's a true family."

Finally, how does it make you feel to know that you're held up by many as an innovator?

"Being known as this innovator is just - it's the true facts. It makes me feel, in my head, like I have a purpose in life. I am proud that I have been able to be a part of a creation that has taken off around the world."