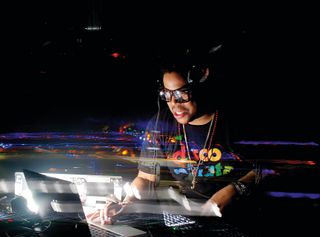 Felix rocking Serato in the booth

Felix is probably best know as one of the firestarters of the revamp in glam electro that happened in the early 2000s. His trashy disco and techno fusion offered something new to where much of the other side of electronic music was lacking.

His album He Was King, was a twisted techno and Synth Pop fusion while his last album Son of Analogue was a more throbbing, diverse, electronic affair. We necked a few tequilas and had a chit chat with him before he jumped on the decks.

Tell us about how you work in the studio.
"I record a lot of the stuff live as I really like that feel. I'll go straight to Pro Tools and do eight bars or something like that. I mean if the idea is something that's really difficult to play, then I'll quantise it, but usually I like that live feel."

How would you describe your last album Son Of Analogue?
"It's not really Breaks, or Drum 'n' Bass but it's definitely not all four-to-the-floor. It's a full, constant flow of music though - I really loved it when Prince did that with Love Sexy."

And you gave the CD away?
"Yes, on the cover of Mixmag."

Are you enjoying the digital revolution?
"There are some things I hate about it and some things I like. The thing I like about digital is the fact that I don't have to carry around three cases of vinyl anymore. I can just show up at the show with my Serato and go."

Serato is the main choice then?
"Yeah, I don't understand why these DJs use Traktor or Ableton. Anyone can do that and just press play. When I DJ I want people to be able to feel my Tequila [laughs and hear that I'm actually blending the records myself."

Where do you make your gear purchases?
"When I first started I used to go to guitar centre in Chicago, but I really got tired of waiting around, so when I got to Atlanta I met this guy who really knew my sound and what I might be interested in and he'd hook me up with gear."

So what was the last thing you bought?
"My TL Audio [M1-F Tubetracker] desk was my latest purchase, which of course, I ordered from
England. It took ages to arrive, but I have that now. It's the eight channel version for stemming. Before the desk was actually the Moog Little Phatty, so that was a few years ago. My favourite synth is my Juno-106 but it's been in the repair shop for ages. Y'know I got so caught up in being a gear rat and just buying all this stuff that I really lost focus on the music, so I was really trying to get back to that."

Do you make music on the road on a laptop?
"Not on a laptop - this is forbidden. A studio is not a laptop in your kitchen. I travel and I have friends and I'll use other studios on the road. It's cool that you don't have to carry any DAT tapes around any more though."

Do you know if Prince heard your track We All Wanna Be Prince?
"I think he probably did, just because if anything ever appears with his name on it, he's ready to pounce and shut it down." [Laughs]

So did you have to clear it?
"No, I just put that shit out there. The song went so viral though, it was on Perez Hilton and Justin Timberlake's sites. Plus the guy Dallas Austin who plays Prince in the video, is good friends with Prince. You'd have to be a bit of an asshole to get annoyed by a song saying that everyone wants to be like you."

We heard the song was made in three hours?
"Nah man, not even that. The guy I was working with was still working late and I was asleep and I woke up to hear this beat and that synth stab. I was like, 'yo man that's Prince and we all wanna be Prince'. That was it, I told him to turn the mic on and I'd sing every cool Prince lyric I know and that's what happened." [laughs]