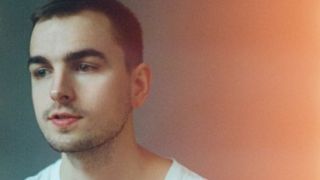 Cyril Hahn is a fan of hardcore punk and French filter house who has garnered a following without indulging a hint of the drop-based, cutoff-frenzied, in-the-red production that combo might imply.

Born and bred in Bern, Switzerland, but currently based in Vancouver, British Columbia, Hahn is the opposite of aggro. He is an unassuming sound designer of fine-grained, huddled house textures that have been spotlighted across fashion-forward blogs, even by Vogue.com; it's not a bad return for what began solely as a hobby between art history studies.

Recovering from a cold but willing to brave the lashing winds of an atypically frigid Mid-Atlantic evening, Hahn took an hour while touring with fellow self-taught, feeling-led producer Ryan Hemsworth to walk around Washington, D.C, and share a few craft beers and some production insight.

In an online interview for Vice's Thump channel you mention that you initially felt house music was "the devil" - what was so devilish about it?

"What I associated with house music was stuff I'd hear in elevators: this bad, MIDI, loungey house I knew in high school. Even just a few years ago, when I'd listen to Daft Punk or Fred Falke or Alan Braxe, I didn't know that was a type of house music. To me it was just danceable electronic music.

"Then I just slowly started listening to more four-on-the-floor stuff from a leftfield perspective: people like Fort Romeau, Disclosure, which isn't leftfield now, but was at the cusp at that point."

What was your preferred style of music prior to discovering the 4/4 stuff?

"I was really into Minor Threat, Gorilla Biscuits, and then I moved on to '90s emo bands. There was a cool DIY scene even in Switzerland, so I went to a lot of squat shows. I felt like everyone was super nice and supportive in that environment, and what I liked about that stuff was the raw feeling, the realness.

"Even though my circumstance is really different, what I liked from DIY culture was that you don't need much to give music a try. I started doing remixes by just using what I had at my disposal, which was a Windows Vista laptop and a MIDI controller, and it worked fine for me at the time.

"Also, DIY culture has the acceptance and appreciation of allowing some noise rather than thinking it's a bad thing. I think it's a beautiful thing, if you work with it the right way."

During those early Vista days what was your first a-ha moment?

"I was always familiar with effects, because I play guitar so I'm used to pedal boards and this means I know what to expect from reverbs and delays and that kind of stuff, so it was more things like bass reinforcement.

"I remember when I did my first remix and showed it to a friend he said, 'Man, this is so sweet, but it really needs a sub bass.'

"My friend told me to use Native Instruments Massive and I did, though I listened a year later and realised how I used it was horrible. Now I add more of a tweaked 808 sub and mix that with a raw drum machine sample until they work nicely."

The art of filtering influences

What drew you to the pitched, elongated and androgynous elements of your initial remixes?

"In high school I used to make post-rock recordings, just making pretty shitty instrumentals of drone sounds, and I'm sure that's still part of it. Chopped and screwed - that Houston style - I for sure discovered around the same time. But also people like Burial and Shlohmo have treated vocals to pull out the longing and they were a big influence.

"Pitching it down gives it a new haunting quality, even when it's a super ridiculous lyric; it almost gives it a new meaning just from the sound of it."

As an art history major in college, during your initial productions, did staring at abstract impressionist works etc., help you see isolation and exaggerated figures in a way you translated to sound?

"[Laughs] No, I think it was more that art history is about deconstructing things, so now I listen to music in a more analytical way than I used to, picking apart every single layer.I hadn't been doing any music while I was taking my studies of photography more seriously, but I missed being creative sonically and I started using Ableton.

"All those first remixes, like the Mariah Carey [Touch My Body] one and the [Beyoncé's] Say My Name one, I worked on each for two months as I was figuring out how to work the program and how to sequence an electronic song. I'd never really done drums before, so it was all about figuring out what works."

What drew you to Ableton Live as your preferred tool? Was it the versatility to use it as both a production and DJ tool?

"No, because playing live was never an ambition I had. I started in high school on Cool Edit Pro, which I loved because it was so wave-based and you could zoom in and chop so precisely, but it was shitty for MIDI and doing drums.

"Then I downloaded a lot of demos of programs and Live was the one I had the most fun with. Even when I started with Live I still used Cool Edit Pro, which is now Adobe Audition, and I would 'master' in it, but I pretty much do everything in Ableton now, which is nice."

Do you prefer to play or draw notes in?

"I'm a click-draw drummer, definitely. My process is very controlled; it's not like me jamming at home. It's my laptop, my MIDI keyboard and a lot of work with my mouse, because I spend a lot of time on each layer or element. Automation is super important to me; some people don't like it because it seems tedious, but I think it's fun to draw curves.

"All the dry/wetness of my effects and my volume/gain are crazy automated. But I try to hide my MIDI by adding noise and field recordings, and eventually I want to make it even more personal by adding my own recordings.

"That's something I definitely respect about people like Toro y Moi, how he has these great pop songs, but he mixes in unusual, personal samples."

So when did you draw the line between making noise and shaping noise?

"I grew up learning piano and keyboard, and with piano I just played songs but when I picked up guitar at 14 it allowed me to improvise and write my own songs for the first time.

"Those actually weren't that noisy; I even had a phase where I wrote songwriting, folksy songs with lyrics, and I would even play the banjo. But then I got into post-rock stuff, and what I really liked was the editing part.

"I was never a great instrumentalist, but I felt I had a great ear. I would record then spend hours fiddling with the sound, and now I've finally realised what I like about electronic music is how you can sculpt sounds forever, because each sample or artefact has endless possibilities.

"It appeals to me to have all these things to put together, rather than spending all my time trying to perfect guitar or piano."

How do you balance establishing a functional club track and presenting an artistic expression?

"For me, it's all in the background, how I'm layering the white noise and the field recordings. If you take away the synth stabs and the drumbeat of my songs, there are a lot of ambient elements in it still."

Walk us through production on your single Perfect Form (feat. Shy Girls). What were your key virtual instruments, plugins, etc.?

"I started with the a cappella, chopping up the parts I like and adding drums and a synth line I like. The synth was the [Korg] M1 VST, I think, and then all my drums are samples I throw into [Ableton's] Impulse, and I like a single track for each drum sound to be more flexible when it comes to tweaking them.

"I might have used the Juno synth emulation [Togu Audio Line] TAL-U-NO-LX, and there's some real [Roland] Juno-106 in there, too, more for layering and ambient sounds."

What interfaces do you use to coax and capture those sounds?

"I use a portable Novation Nocturn 25USB-MIDI keyboard for VSTs, and I used an Avid Mbox to record in keyboards. I just picked up an Apogee Duet that I'm super happy with, and I use it live, too, with a livid CNTRL:R. I swapped to a MacBook Pro about a year ago and I've very happy with the stability.

"Another thing I use a lot in my songs are the Arturia VSTs. I think they sound pretty good for digital plugins. Then I have a really shitty $10 Yamaha FM synth, the Portasound PSS-380, but it's one of my favourite pieces of equipment because it's so shitty and creates a lot of noise. It's what I used in Raw Cut for my bassline and you can hear the shitty FM synth breath with each note, which I really like."

What are other ways you work with what we'll call positive distortion?

"I like to use multiband compressors and tweak the levels to simulate something tape-like that fits the source and allows artefacts on samples to come alive naturally in the background."

Do you prefer to work with vocals as a linear narrative or an affected, highly editable instrument?

"I like both, and even if it's more a song with bigger chunks of lyrics, there are always samples or artefacts in the background you can toy with. With Perfect Form it has main and background vocals, but then probably three other vocal samples in there that are more used in an ambient sense."

What's your monitoring environment for mixing in all the subtle elements?

"It's not so much an environment; I didn't even have studio monitors until this year, so that's changed my production a lot. It's crazy what you can pick out when you've got a good set up.

"I've now got the Genelec 8030A, perfect for being at home. They don't have a lot of bass and they're really unforgiving, which I think is good for me. Before I was using headphones or shitty speakers and my work was a lot more muggy, and now my mixes are becoming a lot more crisp. I now feel monitors should be one of your first acquisitions, rather than buying a shit ton of synths."

Where do you currently feel your progression is headed?

"I definitely want to embrace the lo-fi aesthetic even more, doing more downtempo stuff like how I started out. I'm thinking of people like Leon Vynehall, producers that are really raw, lo-fi, noisy at times, and I'm a fan of that. I want to get even more organic."

Cyril Hahn's Perfect Form/Raw Cut single and his remix of Sigur Rós' Rafstraumur are out now. A playlist of his previous remixes can be heard on Soundcloud.