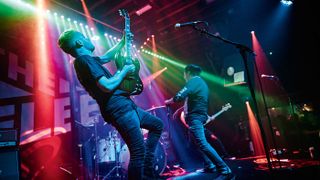 The Tours That Never Were is aiming to raise funds by selling merch for a group of bands who lost income when their scheduled tours were cancelled in the wake of COVID-19 quarantine restrictions. And it's already off to an incredible start.

The scheme is the brainchild of Good As Gold PR's founding duo of Matt Hughes and Haley Connelly, alongside Black Peaks bassist Dave Larkin and help from designer Aled Phillips and Awesome Merch.

Funds will be used for the band and their crews to get them through this difficult period without touring. Fans can also donate if they wish.

"We created this campaign as a reaction to a number of bands and artists we know being left in a really tough financial situation after being forced to cancel tours after buying merchandise stock, booking transport and accommodation and so on," Dave Larkin tells us.

"Self employed touring crew, whose livelihood relies on these tours also have been left with no income. At this time it seems really important for the music community to come together, support each other and show solidarity – in fact some of the artists we approached were open that, while they didn't need financial assistance at this time, they were keen to be included and use their profile to raise awareness and will share of the proceeds to support relevant charities of their choice.

"The reaction has been amazing in the first few days - far more than we had expected. We're aware this is a tough time for everyone, so to see this positive response has been very heartwarming."

You can help over at the-tour-that-never-was-2020.myshopify.com