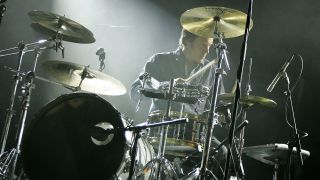 When shoegaze pioneers Ride returned with a new album, their first since 1996, we took the opportunity to sit down with drummer Loz Colbert and put our batch of burning questions to him.

“It was a Maxwin kit, that was the first kit I bought and it was the one that I learned on. I also would have recorded the first Ride demos and played our first gigs with that. It was a white kit and single headed. It came with about five toms so I had this array of toms and I used to get really carried away in trying to play all of them.

"I would make up melodies on the toms because they were quite tuned and ringy. I used to get lost in making up riffs and hooks on the toms. Maybe that led the way with my playing style.”

“I was self taught. I just listened to records. There was one day when a jazz drummer came by, he must have been a family friend and arranged by my mum. I probably didn’t realise that I could have asked him all kinds of questions but he gave me some guidance.

"But mainly it was just me consuming pop music and early hip hop. I loved the beats and just tried to emulate them. After meeting that jazz drummer I started trying to learn from books as well and had to teach myself the music.”

“In that first period of me playing it was more pop music rather than drummers that inspired me. I didn’t know so much about the concept of a drummer and what they do until Ride started doing our first demos. I would finish a take and everyone would chuckle and mention Keith Moon.

"I didn’t even know who he was so I looked into it to see what they were talking about. Weirdly, it was once I was in a band that I started to look at drummers. It was the drummers of the 60s that I associated with, mainly through playing melodies on the toms.

"I liked drummers like Mitch Mitchell, Ginger Baker and Keith Moon. I felt those drummers more than the hi-hat and snare drum drummers. I like the busy tom players.”

Who do you see as an underrated drummer?

“Pete de Freitas was a big influence on me. I feel that he’s underrated because he has a soulful and emotional quality in his playing and that’s not the kind of thing that drummers usually discuss. It’s usually down to paradiddles and your press rolls.

"There was something about Pete that ran throughout the music. His voice as a player was strong and present in all of Echo and the Bunnymen’s songs. There are a lot of drummers out there that don’t get the acclaim that they deserve, it’s the nature of the business.”

What is the best piece of advice that you have ever been given?

“In terms of the industry, it is very important for drummers to learn about equipment that can keep them in work when they’re not just drumming. So learn about samplers, Ableton, Logic, become an arranger and put down tracks of your own. If learning about triggering will get you more gigs and will open up your capability to work in wider areas then do it.

"The equipment out there might not just help you but it might also keep you in work. As a drummer, it is important to think about keeping time but not to see that as a restriction. It helps to see it as a discipline that helps to reduce your decisions.

"I hear 12 ideas for a song while I am playing it and I want to try them all out. That led to my style of drumming in the early years but over time I have gradually realised that it is much more about the time and flow of the song. It all comes down to time and value.”

What is your greatest strength as a drummer?

“Passion is my biggest strength and also my biggest weakness. I will take the song to a place that people would not expect and make an exciting moment but that might mean in other areas I might be distracting from something that should be metronomic.”

What is your proudest moment?

“I’m getting a really good feeling for having achieved the new Ride album. I’m proud of the songs on it and my input on it. When tracking I had to think about how to approach playing with a band that had existed in a certain era but then also considering all the changes that had happened in music since we had been away.

"I had leaned a lot from being a session drummer where you are there to do a job. If you’re a plumber you fix the leak, you don’t make a beautiful array of pipes. It’s refreshing to apply that to a band context. In bands people can get carried away with their own input. It was nice on this album to see myself as part of a machine.”

Have you ever had an on stage nightmare?

“I can remember when I was in a band called The Animal House. It was completely different to Ride. Ride was organic with four guys playing together. Animal House was this futuristic, metronomic situation where we used backing tracks and played to an Akai 24-track sampler.

"That was the first time I had played to a click. We spent all this time working out these songs in their cinematic glory with all of this equipment and I was using triggers and samples. The drumming role was just one part of this huge sound.

“We had a gig at Fuji Rock and it was the high point of our career. We were big in Japan as the cliché goes. We flew out and were completely jetlagged onstage and the sampler went down. All of the backing had gone. Everyone was looking at me, as they always do. I just did what came naturally, I played music and played the drums in a way that didn’t need all of that stuff.

"It actually sounded pretty good and makes you wonder why we did all that stuff in the first place! It felt like quite a big thing at the time though with all those people staring at us.”