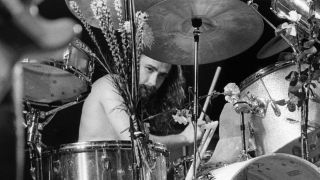 His pioneering work behind the kit with Black Sabbath helped invent the genre, and his hard-hitting, jazz-influenced beats played a big part in Sabbath becoming metal’s first behemoth.

Ward, who endured a very public split with Sabbath ahead of their farewell album and tour, has kept himself busy in recent months.

“I’ve spent five months writing, I just can’t stop writing,” he says. “I’ve been writing music and I’ve finished writing a book of poems and statements and things like that. I’m working on a release for Day Of Errors as well.”

Discussing the origins of Day of Errors, he adds, “I got so lonely in 2012 and I wasn’t playing drums. I thought I would just form my own band and play drums again. I think it was 2013 that we started looking for two other people and formed Day Of Errors. We did some gigs last year that went down well and we’re hoping to do more in September, October, November and December, just in the US for the time being.”

During a rare slice of downtime, Bill chatted with us and took on the task of answering our must-know questions. Here’s what he had to say.

“It was a Premier. It was a mahogany kit with 20” bass drum and a four-inch wood-shell snare. I had a concert tom which was really tiny, maybe 9”x8”. We couldn’t afford the floor tom so I just had the bass drum, snare and one tom. It was great, I did a lot of work with that kit.

"That kit stayed with me until I got a Ludwig kit and that was quite a while later. I think I got that Premier kit when I was 15 and up until then I had been borrowing drum kits. I played clubs with that kit until I was about 17.”

“I was self taught. I didn’t take any lessons. But I’ll tell you what, I was around a lot of drummers. Even when I was still at school we would go to the pubs and clubs in Birmingham and I would watch all of the drummers. I’d see Jim Capaldi with Deep Feeling and I would sit on the stage right next to Jim and watch him.

"When Clive Bunker was playing with Jethro Tull I would snuggle in right there by the side of the stage and watch Clive. There were so many guys back then to watch and I watched everybody. Micky Evans was one of the biggest influences on me. He had a drum shop in Birmingham and I would watch him. I would see him every day for years.

"There was another guy called Lionel Rubin who would play for the BBC at lunchtime. It was the kind of band they had when there was a talk show on TV and I watched him as well. These guys were all my teachers. I had a lot of teachers. When I think about my upbringing I feel like the most fortunate person. It was a marvellous era for drummers.”

Who did you look up to as a young drummer?

“There was a community around the drummers of the West Midlands. We would all congregate around Micky Evans’s shop. There would be maybe seven or eight drummers sat in there and we would all play a little bit and show each other what we had learned. It was like a drum workshop.

"Bonham would come in and lay something down in this nonchalant way and he would be doing his triplets on his bass drum. He would talk about Buddy as well. We would all talk about Buddy. There was camaraderie between the drummers even though we were all always away working.”

What was the first song that you learned to play?

“I would listen to lots of songs and try to learn them. When I was in my first band at 14 we were doing pop songs and things like Chuck Berry. We would go as far as to play some Howlin’ Wolf. That was as extreme as we got at 14 years old. I would try my best to listen to the records and copycat what they were playing.”

How did you develop your drum sound?

“I based my tuning on Gene Krupa, Buddy and Joe Morello. I knew how I wanted the drums to sound and we did the best we could with a beat up Ludwig kit. I spent a lot of time around drummers learning how to get sound. I knew the sound I was after and what would work for what we were playing.

"My floor toms were particularly important in the way that I tuned them because we were already going to things like the song ‘Black Sabbath’ so I needed power in my toms. I needed that for my build-ups and for songs like ‘Fairies Wear Boots’. I tuned to maintain the integrity of the sound but at the same time to give the kit some wallop.

"Keep in mind that we still didn’t use PAs for the drums back then, everything was live without microphones. That was definitely a challenge and it gave me muscles like you would not believe! I blessed the day that someone said, ‘Can we put a couple of mikes on your drum kit?’ I said, ‘Go for it pal, I’m dying here!’”

What is the key to your playing style?

“Without the jazz influence, the Black Sabbath drumming would be very different. The feels and jazz feels and rock feels were exactly, to me, what we needed in the song. Tony [Iommi] also has a jazz influence. We were playing swing. ‘Fairies Wear Boot’ is like a blues swing.

"The song Black Sabbath actually has no specific time. We would just go back where Tony was putting the main notes of the song and I would drop my hats in there. We would measure it all off the hats and Tony’s guitar. If you go looking for the one on the song you’re gonna be f***ed!”

What has been your biggest career highlight?

“As a child the dream was to be like Elvis and have a hit record. I thought if I did that all of my problems would be over. Of course that wasn’t the truth at all. But when our first record went into the charts, I think it was at number 27 and it was the song ‘Black Sabbath’.

"We found out about it when we were at a pub in London and our publicist told us it had charted. I looked at Tony, he looked at me and I said, ‘Oh my god.’ I didn’t know how to feel. It felt uncomfortable and strange and at the same time I was elated. We had accomplished something after a long time of trying.”

What is the key to longevity as a musician?

“One of the things I loved about Black Sabbath was when we were on the road there were times we had been on the road for so long and we were tired and we were exhausted. We would show up at gigs and we were so tired that we would be fast asleep in the dressing room. Our road manager would come in and say, ’20 minutes, guys.’

"Nowadays I have to be awake at least two hours before a show, I have to do all kinds of things. Back then it was 20 minutes and I would watch everybody get off their chairs. All we wanted to do was go to sleep for a few days and to see the tenacity of the band and regardless of injuries we would get on stage and as soon as we were up there it was like, ‘Bam!’ You were hit with an incredible force.

"The band came alive on stage like someone had switched us on. When we were finished we would go back to the dressing room and lay down again like we had been before going on stage. The gig was always the priority. We never gave up.”

“To be true to yourself. That has worked for me in music and in my family life. That way I can have a stronger relationship with myself. I am honest about who I am, where I am and what I think. Things haven’t always worked out how I want them to, but the eventuality of being honest is a daily gift. Being able to tell the truth is a gift.”