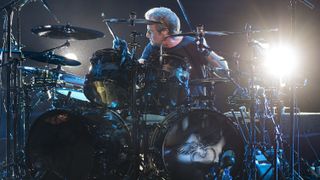 You’re currently rehearsing for the latest leg of Bon Jovi’s This House Is Not For Sale tour. After all of these years playing with the band, can you give us some insight into what a Bon Jovi rehearsal looks like?

“It’s all about getting the gears greased up a little bit. You know, we have a lot of songs. Every 10 days or so before we’re doing something we’ll get together for a couple of days. We have maybe 100 songs to pick from and we all like changing it up so we’ll go over all of them.

"We have the obvious songs, but there’s also some others that we like to play around with and elongate a little bit just for fun. The songs change yearly. Our hardcore fans will throw up signs with songs they want… of course, they think the show is just for them [laughs].

"But we take note and we will add some songs that people want. But if people are seeing us for the first time they need to hear the hits.”

You’re coming off a little downtime – what do you do in those months off the road?

“Sometimes we’ll get together to write in those times and keep the juices flowing. We want to keep it fresh. When we’re doing something I’ll get into the groove in my practice room, but playing live really is something that you can’t practise.”

Might there be new Bon Jovi material next year? Has that been discussed?

“At this point, no, it hasn’t been discussed, but knowing how things have happened in the past, some things could filter in. Like last year once we were nominated for the Rock & Roll Hall Of Fame, we wrote a couple of songs and re-released the record and it went back to Number 1 in the States.

"With this band, you never know what we’ll do. The Hall Of Fame was a big thing – it’s like if you’re an actor and you get an Oscar.”

What kit can we expect you to be playing on the UK shows next year?

“I’ve got a new DW kit that I’ve had for the last 30 shows or so. It’s well broken in and it sounds great. On my previous kit I couldn’t quite get the sound I wanted out of my 13" tom, so that has been worked on.

"I’ve tried cherry and all kinds of wood and maple has always smacked me in the face with the tone. It has that warm tone. It gives me the resonance that I need for our sound.”

“We’re playing some new places on this tour, but you’re right, we’ve done a lot. We have our 100th show in Japan coming up! We’re still excited to go out and play. We’re always excited to play Europe. We always say about European fans, ‘They don’t just know the choruses, they also know the verses!’ That’s true!”

You’ve just shifted tickets for huge stadium shows in the UK – why has your popularity sustained so much over the years?

“Maybe it’s because we’re still making new music so we have multiple generations of fans. Maybe we have three generations at our shows. Also, we put on the best show that we can and we play for as long as we can until we fall down.”