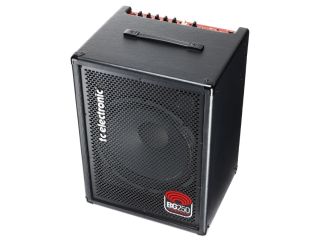 PRESS RELEASE: TonePrint offers the ultimate power to choose and swap world-class bass effects, and now the range of effects has been expanded to also include SpectraComp and BassDrive!

SpectraComp is a three-band compressor that applies compression to each individual string as it handles bass, mid and treble frequencies individually.

Traditional one-band compressors tend to be controlled only by the lower strings, but with SpectraComp compression now becomes much more musical. It can add subtle and transparent compression, but can also be brutal and give a thunderous punch by applying heavy compression.

Whatever type is needed, SpectraComp delivers exactly that. SpectraComp has been ported directly from TC's high-end Blacksmith and RH750 amps and is an integrated part of the overall Bass Amp 2.0 concept introduced by TC in 2009.

BassDrive, as the name implies, is an overdrive tailored specifically for bass. BG250 already features TubeDrive that adds warm, tube-like character emulating not only the tubes of an analog preamp, but also a tube power amp section.

The new BassDrive takes it a step further as it can be seriously cranked to become a growling and snarling overdrive monster - perfect for hardcore musical styles.

In order to use these new types of effects with previously sold BG250 bass combos, the owners must update the internal software of the amp. This only has to be done once, and the entire process takes just a few minutes.

The software update is available as a free download on TC Electronic's website and the update process is as simple as connecting the combo via USB to the computer.

TC's BG250, which was introduced in Frankfurt at Musikmesse 2012, is a 1x15" ultra-light bass combo and the first amp in history with the power to choose and replace on-board effects time and time again.

BG250 comes packed with 250 watts of power, delivered through TC's cutting-edge, lightweight Class D amp technology, bringing the total weight of BG250 down to an extremely portable 35 lbs., one of the lightest yet loudest combos in its class. The preamp features an ultra-fast, integrated 5-string bass tuner, TubeDrive and intelligently contoured Bass Tone controls that create anything from crispy, modern slap tones over grungy, cranked-tube-like tones for classic rock to tight and funky Jaco tones with ease.

Further, an Auxiliary input and headphone output cater for any playback and rehearsal situation, while a balanced XLR output makes recording and live performance a breeze, all of which is underpinned by the cornerstone of great bass amps: superb tone.

TonePrint is a versatile effect slot that lets the user decide exactly which effect the amp should use at any given time.

BG250 comes loaded with TC's legendary SCF Chorus as a default, but numerous new bass effects can be downloaded from TC's website, replacing the default chorus with other effects such as Octaver, Compressor, Overdrive, Distortion, Flanger and Vibrato.

To make the deal even sweeter, TC had some of the best bass players in the world tailor their own personal effects tones for anyone to grab, and best of all - these Bass TonePrints are completely free of charge.

To load new types of effects or the artist-made Bass TonePrints, users can simply hook up their amp to a computer via the included USB cable. Or even cooler: beam them directly from their smartphone straight into BG250 using the mind-blowing TonePrint App for iOS and Android.

Quite simply, it is an ever-expanding effects joyride, as new TonePrints will be added constantly in the future. This is merely the beginning.