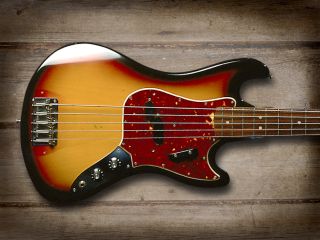 Whether it was due to the acceptance of the Bass VI by the bass playing community we can't say but the reasoning behind Fender's Bass V is still something of a mystery.

It's considered by many to be the worst Fender bass design ever and adding a high C string, rather than extending the bass range below, is hard to understand but obviously the performance restrictions of bass amplification of that time must have played a significant part.

Although it had a slim elongated body and a downsized neck with fewer frets, it still achieved a full 34-inch scale length. Initially the neck was unbound but around 1966 it became bound with block markers. A year later a maple fingerboard option was introduced. The extended headstock makes it ungainly so its visual appeal is virtually zero, it's neither attractive nor sexy and both are essential elements of any instrument.

However, it did allow easy high note access across the board rather than up the neck and it actually sounds like a Fender bass so no complaints there. But even with John Paul Jones championing the instrument during his Led Zeppelin days the Fender V failed to gain popularity.

Nowadays it has become highly collectable and is certainly a classic instrument so justly deserves its moment of glory in our cool and classic gallery.