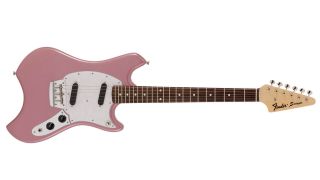 Fender Japan is often the source of unusual and unexpected models from the company – and this comeback for the short-lived 50 year-old Swinger model from 1969 is a case in point.

The Swinger went by other names in its brief past life, including the Fender Musiclander and Fender Arrow, and was a misfire in the company's CBS era, not helped by its recycled beginnings.

The short-scale model was aimed at the 'student guitar' market but was barely pushed by the company and sunk into the mists of cult appeal… until now!

It's new and improved too with two single coil pickups instead of the original one with master volume and tone controls now, along with a three-way switch.

The hardtail bridge remains a three-saddle configuration as before, along with a 22-fret shortscale neck.

Five colours will be available: Black, Burgundy Mist Metallic, Dakota Red, Olympic White and Sonic Blue. But the bad news for Swinger fans is it'll only be available in Japan at YEN 103500 around $1000.