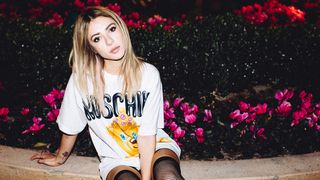 LA-based producer Alison Wonderland rose swiftly through the DJ ranks due to her dexterous, multi-generic sets, played with an abundance of energy. Last year, she cracked DJ Mag’s Top 100, and with a new album out next month it looks being another promising year for the excitable star.

Having begun her musical career as a cellist in the Sydney Youth Opera, Alison Wonderland played bass in rock bands before gaining national recognition after coming second in EMI’s inaugural She Can DJ talent contest in 2011. With that, came a record deal with the label industry giant, igniting a career in production.

The diminutive producer released the mix CD Welcome to Wonderland a year later, then focused on recording her own material inspired by electronic bands such as Swedish duo The Knife. Three years later, Wonderland presented her debut synth pop album Run, which hit the No. 1 spot on the Billboard dance charts.

With her production chops continuing to grow alongside a burgeoning DJ career, we tapped into Wonderland’s knowledge pool to get her top 10 tips on production and DJing…

1. Don’t become a slave to fashion

“When you’re creating, the worst thing you can do is think about what sounds are currently in fashion. The best way to think about it is that all of us resonate to different types of noises, frequencies and textures of sound. Listen to what hits you and eventually you’ll figure out the right path to developing your own sound. I don’t think what gear you use matters in terms of software or hardware.

“I started out on Sylenth, because I didn’t have much money, and worked out how to make certain sounds based on the different artists I liked. I loved The Knife, Hudson Mohawke and Hans Zimmer, so I’d look to see how they made their sounds. That led me to buying the Access Virus TI2 Dark Star Edition with my first paycheck, which was super-awesome.”

2. Rely on your ears

“As a self-taught producer who started in the bedroom with an old version of Ableton, I’d say there are no rules when it comes to production technique. I had hardly any drum sounds to play with and didn’t understand how to create them, so I started using my iPhone voice memo to record things in the kitchen I could use as drums sounds. I didn’t even understand how to make reverb, but I knew what it sounded like so I’d sing in the bathroom using the natural reverb of the room.

“I guess that’s how I learned to put stuff down and create. It’s funny because the first time I got into the studio with a producer he asked me how the fuck I made the sounds that I did. When I explained how, he said it was the weirdest technique he’d ever seen, but it worked. Basically, your ears are the best thing you possess as a producer.”

3. Take advantage of those early years

“As someone who’s been producing for 10 years and only got noticed later on, the best thing I can tell anyone getting into production is to take advantage of the time you have right now to learn and experiment because once you’re successful you’re never going to get that time back.

“I had five years to work out how I was going to make stuff and slowly find my sound. I started off trying to make nu-disco and the next week I was trying to sound like The Knife or Sleigh Bells, so I feel it’s important to use that time to experiment and play with things to see how they affect sound or how you can change the vibe or tempo of a song.”

“I found that having access to stems was really important because you can learn how individual sounds are layered. When I first got into production I didn’t have that and started begging people for remixes so I could look into their process. Then, when I released Run, I put the stems out because I wanted people to use those sounds to see how my songs were built.

“There’s also a great platform called Splice, which gives you access to samples from people’s tracks that they’ve uploaded. If I had all these technologies back then, I could have made music so much quicker.”

“If you don’t feel ready or it seems like no one’s getting back to you - that’s fine, just keep going. You have to realise that it’s very rare that someone becomes big overnight, so just remember that you’re going to hear ‘no’ a lot more than you hear ‘yes’. Use that negativity to motivate you to keep going and work harder, and use social media to put yourself out there.”

6. Prepare your tracks for mixing and mastering

“I used to mix everything myself, but now I take that to someone else. I’m a songwriter first and I like creating everything very quickly – my thoughts are so instant that I’ll forget them if I don’t put them down right away. That’s why Ableton resonates with me over Logic or FL Studio, because it’s more intuitive.

“At the moment, I really love using iZotope’s Neutron. It’s so sick because it analyses tracks for you, EQs them and helps you mix so you can clean up your project sonically. I’m not going to lie, I’m shit at Pro Tools, but I do get my stuff mixed on it because it makes all my music sound so much bigger.

“I give the mastering process to someone else too because that’s an art form in itself, especially if you want something to sound good on a laptop, the radio or in a car.”

7. You can’t be creative every day

“Sometimes you can go round and round in circles when you’re trying to come up with ideas, so when they’re not coming just walk away and do something else. I have a tattoo that’s based on this whole concept I feel about life. Basically, I believe that order will always turn into disorder, which always turns back into order. Everything is a cycle and it’s the same with creativity.

“If somebody claims to be creative every day of their life, they must be an alien or a freak. When you’re making emotional music that comes from a deep part of you, it’s very exhausting trying to tap into that every single day. So when you’re not feeling creative, go outside and do something totally unrelated to the business.”

“I feel like people always put DJing and production in the same category, but I think they’re polar opposites and should be separated. Music is so personal. That’s why I find it hard to produce on the road because, for me, performance is a very extrovert activity where I’m putting myself out there and using a completely different part of my brain.

“When it comes to production, it’s an introverted and narcissistic activity and I feel it’s better if both DJing and production are looked at in those terms because they’re completely different skillsets.”

“Learning how to read the crowd is a very important tool to have as a DJ, but don’t play stuff you don’t like just to please a crowd because if you’re not into something people can feel it.

“Always play tunes you’re into and don’t ever compromise or play what you think people want to hear. At every show or festival I play, there will be something in every song that resonates with me, and that’s what gets me in the zone, so it has to come from a real place.”

10. Be flexible - there are millions of songs

"There was this one show where the guy before me played every song I wanted to play that night and I was really upset. He was definitely fucking with me and I was crying and didn’t know what to do.

“My manager gave me the best advice ever; he said there’s a difference between a good DJ and a great DJ. A good DJ is technically good and knows how to play the right songs and read a crowd, but a great DJ realises that there are millions of songs out there, not 40, and you can always turn a crowd around.

“You don’t have to play the expected songs and there are so many possibilities or ways of branching out within your set. I’ve noticed that a lot of opening and support DJs are playing all the bangers. It’s not like it used to be when I started, when a support set could be as individual as the main set, and I see so many headliners sweating because the support DJ is playing every hit. I guess I’m lucky because I’m mainly playing my own music.”