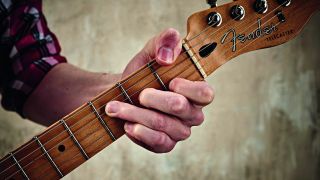 If you're a guitar player reading this – congratulations. You made it. Because according to our new interview with Fender's CEO Andy Mooney you've beaten the huge odds that are stacked against you.

According to the Fender chief, the company found that of the 45 per cent of guitars Fender sold in a year that went to new players; 90 per cent abandoned the instrument within their first year as a beginner.

"As an industry, we don’t have a problem attracting new entrants," says Mooney, "we have a member retention issue."

Fender are certainly being proactive in tackling the issue; putting huge amounts of time and long-term investment into the learning market with its Fender Play and Fender Songs services.

And if Fender actively wants to make it easier for people to pick up the guitar and get to grips with playing it, it's for very sound business reasons, as Mooney explains.

"We did the math. The 10 per cent of the salmon that make it through the dam have a lifetime value of $10,000 [each]. They buy five to seven guitars, they buy multiple amps, they drive the hardware side of the business.

“We felt if we could reduce the abandonment rate by just 10 per cent we could double the size of the industry," Mooney adds. "[There are] a million new entrants in English speaking countries alone every year; only 100,000 of them commit. If you could reduce abandonment by 10 per cent, that's an incremental 100,000 with an average lifetime value of $10,000. That’s an incremental billion dollar retail business every year."

More guitar players would be good news all round, then. And you can read more about the Fender CEO's optimism about the guitar industry's potential in our full Andy Mooney interview.

Save 25% on Fender Play
Fender Play is one of the easiest and most affordable ways to learn to play guitar - and now it's even cheaper! Get 25% off a yearly subscription - normally an $89.99 value, now just $67.49 View Deal