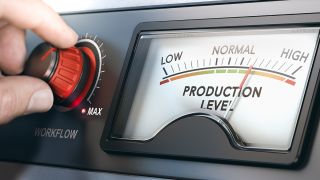 January feels just like yesterday and with half the year already behind us, it’s time to check-in with ourselves and see if we have kept all of those life-affirming resolutions once promised to kick start the year.

It’s not too late to make 2018 your most productive year to date and we have some handy tricks for you to whip your studio life into to shape. Read on as we lay down eight productivity-inducing zingers to get your production workflow back on track.

Writing’s on the wall

A simple way to keep your studio life on track is to identify three positives and three points for improvement from your studio time in the last year, then write them down and pin them on the wall behind your setup. Those things will then always come to mind when you’re working. Once you’ve hammered the positives home and refined those negatives, write a new list to replace the previous one.

Two heads are better than one

If you’re finding things in the studio are becoming a little stale, why not look to other people? Collaborating with other musicians, vocalists or producers can put some new ideas on the table and give you valuable second opinions on what you’re doing – all while allowing you to build a valuable network of contacts that can be useful for future solo endeavours!

Every producer has made one track that’s either their most successful release, or just their personal favourite. With this in mind, why not dig that tune’s stems out of your archives and give it a fancy 2018 makeover? This is not only a great way to spark creativity and address anything you felt was missing from the original track, but can also see you through times of writer’s block. Plus, once finished, you’ll have an exclusive VIP remix to ape the original version!

Speed things up when you’re making music by creating a ‘cheat sheet’ of oft-used keyboard shortcuts that you can keep close by when you’re in the studio. After a while, you’ll naturally learn these, which’ll speed things up even more. Or, if you’ve got money burning a hole in your pocket, invest in an Editors Keys keyboard overlay. This’ll show you every common shortcut for your chosen DAW and which modifier keys (Ctrl/Cmd, Shift etc) trigger them off.

Tackling a remix to start your studio year can be a great source of inspiration. Working on a remix gives you a structured path to take that’ll get you into the right groove when making music during the rest of the year. Find some suitable source material by asking a pal you can reboot one of their tracks, downloading one of the many stem packs available on the internet, or asking around at your local record or music shop.

9 ways to keep the inspiration flowing when you're making music

Laptop user? If so, why not charge your battery and head outdoors to work on a beat on headphones? It can be truly amazing to take inspiration from your surroundings when writing or arranging, and it makes a nice change from topping up your studio tan in your usual spot.

Link to the past

If you’re working in the studio with a fellow Ableton Live user, try linking your two machines together via WiFi and Live’s handy Link function (top left of your screen). This’ll let you jam along with each other in sync, and bring Link-enabled apps and plugins from other manufacturers into play – ideal for increasing the productivity levels and generally having more fun with your studio buddy.

A great challenge for all us producers and engineers is to take an everyday production skill (such as creating a synth sub bass or slicing up a breakbeat) and learn to do the same thing but using a totally different method. Same results; different techniques. This is great practice, as it not only keeps things fresh, but also teaches us to think outside the box when solving problems in the lab. Good luck!