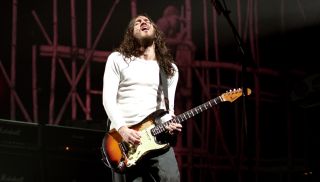 John Frusciante is one of the guitar heroes of modern, expressive, creative electric guitar playing. Known primarily as the guitarist of the Red Hot Chili Peppers for three distinct periods in the band’s history (the third of which has just begun), he also has a prolific (mostly guitar-focused) solo career.

Though his main band are stadium-level, Frusciante is arguably an underrated guitarist and songwriter – perhaps because bandmate Flea’s virtuoso bass playing often historically takes the limelight. However it’s no coincidence that although Frusciante has only been guitarist for less than half of the peppers’ studio albums, every major hit comes from one of those on which he played.

Now he's returned to the band, who knows what songs are yet to come. But spanning both his solo work and his work with RHCP so far, here are five Frusciante songs every guitarist needs to hear.

To write one of the most popular guitar ballads of all-time is one thing. To do it at 20 years old is another. Under The Bridge also represents a Frusciante songwriting trademark of which we’ll see more below. It's a song of distinct sections, each of which drives the song in a different way, but together they make a cohesive, brilliant whole.

The sharply picked, arpeggiated intro is a hugely famous guitar intro, then moving through mellow chords, to embellished Hendrix-style chords, through strumming, a heavy section, and a twinkly fill-laden outro.

Scar Tissue represents many elements of Frusciante’s style; from the compound third (or ‘tenth’) interval guitar parts, to the ‘strummed notes’ technique ie, he frets one note, mutes the remaining strings with other fingers, then ‘strums’ all the strings. Only one note sounds, of course, but there’s a rhythmic, funky, powerful element present that would be lost with fingerstyle playing.

Strats the way to do it

As beautiful as the original version’s slide guitar solos are, this live version from their 2003 Dublin show makes this list because of the sheer perfection of the song’s three guitar solos, especially solos two and three, which, being a little longer, have more space to be expressed.

These solos summarise everything great about Frusciante's playing style - in that they inhabit a fertile middle ground halfway between technique and sheer emotion. This has to be the best all-time live version of this RHCP song.

Inside Of Emptiness was one of the six solo albums in six months that Frusciante released in 2004 is a fantastic example of the dynamic energy of much of his solo work. It begins with a driving, crunchy chordal riff, which becomes a canvas for his trademark semi-cryptic, wordplay lyrical style, before the melodic chordal canvas of a chorus that was a feature of much of his work around this time. But then; a two minute long guitar solo.

Despite 2002’s RHCP album By The Way being largely bereft of guitar solos, they were all over Frusciante’s 2004 solo releases and his live work with the band around this time. The Look On solo is like one big lesson in his style, containing all the hallmarks of his lead guitar playing. To learn it is to immediately get to grips with the majority of his lead guitar arsenal.

From 2006’s double album opus Stadium Arcadium, Wet Sand for many Frusciante fans represents a meeting point between his work with RHCP and his solo career, and as close as the two things have come to overlapping.

In many ways it’s simply a standard, modern-RHCP ballad with mid 00’s Frusciante overdubs and backing vocals elevating it to greater heights. However, the heavier rock section, the sparkling chorus and tremolo-laden overdubs, the trademark scream, and the huge, high-frets, expressive, bending guitar solo transport this song to somewhere very special.

Of course there has to be a song based on an all-out funky riff in this list somewhere and here it is. Given the deep veins of funk throughout Mothers Milk and Blood Sugar Sex Magik, it’s a testament to how much Frusciante later found his melodic specialty that this is the only real funk track on the list.

Those two albums being what they are, it’s perhaps surprising that the funky choice comes from 2002’s By The Way – probably the least funky album the band ever made. The reason for this though, centers on the most significant element of Frusciante’s presence in the band over the years.

It is his songwriting, his musical interaction with bassist Flea, his playing style, and his melodic tendencies that helped to elevate the band to worldwide superstars and mainstream, platinum, hall-of-famers. As such, Can’t Stop represents exactly what Frusciante offers.