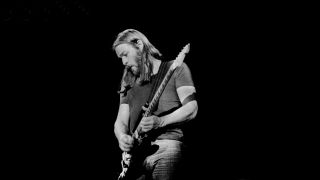 Who is the greatest guitarist of all time? The Pink Floyd legend and lead guitarist isn’t as flashy as Jimi Hendrix or Jimmy Page on the stage, but his guitar work outshines most for emotion. Gilmour is right up there and his work during his time with Pink Floyd is  seminal, featuring his greatest achievements as a guitar player. And it's where we're focussing here.

The track begins with Gilmour playing accented bass notes to go along with the low rumble of clocks ticking and after a few measures, the song begins proper with the entire band striking out into the verse. But the main highlight of the song is not Gilmour’s perfectly paced fills between his verse and Richard Wright’s, the song’s crowning achievement is the sublime tone during the solo.

Gilmour moves effortlessly from one measure to the next, beginning with a few choice bends on the lower frets before moving into supersonic licks emphasized by a liberal use of echo and delay effects. After all of this he moves once again, with the rest of the band, toward a slower, more soulful melody before returning to another verse. It’s a true achievement in a guitar solo, especially since it is not absurdly lengthy, or out of control.

Wish You Were Here was an album that was fairly somber, and laid back but this track, smack dab in the middle is louder, harsher and opens with a guitar tone from Gilmour that’s more bluesy and rock than anything else on the album. It features a heavy use of synth from Richard Wright to accompany Gilmour’s biting licks and fills.

The main riff features a number of movements, including a chugging rhythm along with some bass runs featuring the chromatic scale that has Gilmour running his notes alongside the bass. Also, if you listen closely, the guitar is drenched in a phaser.

Gilmour’s tone is piercing, powerful and completely dominates the end of the record during the solo.

Just when you thought David Gilmour’s style was squarely placed in the blues, he throws an entirely funky riff into the mix.

The entire song features the guitarist’s constant chord progression which is lightly driven and played like it was taken from something closer to James Brown. Halfway through the song, Gilmour's masteful solo (played on a 1955 Les Paul Goldtop) tells its own story through a number of phrases. His use of space between them here is a lesson in the art of tempo and pacing.

The most popular acoustic-led song from the band and with reason. Gilmour played a Martin D12-28 12-string, as well as a 1969 Martin D-35, plus a slide guitar that can be heard in the background where it seemingly echoes the melody of the lyrics.

The song is not incredibly difficult to play but does offer a really fun technique for new guitar players. The beginning of the song features a couple of notes that are played near the nut of the guitar that seamlessly transition into open chords. It’s a great song that anyone can learn and goes to show that Gilmour and co were also not afraid of utilising the power of simplicity.

The band’s performance  from the Live At Pompeii concert film is one of the most iconic live performances to ever be captured on screen. Gilmour’s part begins with a slide guitar, playing minimalist licks before going into a couple of bass runs at the end of the first verse. Then he cuts loose big time.

The guitar solo that seems to sustain for lightyears before the band continues on with a few bars of echo-drenched riffs (pun intended) before diving into an entirely new groove that reminds us of the funk rhythms of “Another Brick in the Wall, Pt. 2.

During this segment, the guitarist unleashes a gigantic couple of fills with the help of boost, fuzz and echo pedals. It's a Gilmour tour de force.