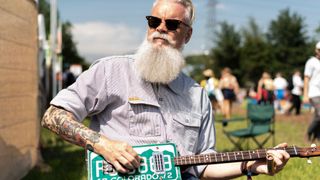 Glastonbury has become synonymous with the electric guitar, from its hippy free festival beginnings to the Brit-pop-powered 90s line-ups or the post-millennial Muse megashows.

2019 is no exception to this rule, but it nonetheless marks one of the bigger overhauls in the event’s line-up, signalling one of the most diverse, contemporary and inclusive weekends in the festival’s history.

Notably, 2019 sees the roll-out of the Earache-curated Scum Stage in Shangri-La, which will serve as a dedicated platform for metal and all things heavy. What’s more there’s an aggressive and/or progressive edge to many of the acts on this year’s bill. Clearly, this ain’t the 52nd summer of love…

Ibibio Sound Machine formed in London but feature Ghanaian highlife legend Alfred ‘Kari’ Bannerman among their number. Their post-punked blend of West African funk and classic dance floor jams attracted the ear of US indie label Merge and has taken them all over the world since.

Bristol-based IDLES’ startling emergence into the somewhat vapid UK rock scene of 2016 felt like a real moment. Then they had another with the arrival of their debut, 2017’s Brutalism. Quickly followed by 2018’s pro-immigration anthem Danny Nedelko, second record Joy As An Act Of Resistance, also in 2018. Jools Holland appearances. US tours. And, well, at some point you have to acknowledge it’s more than a moment and a full-on ascendancy.

Poetically retooling the loutish sing-along to take aim at toxic masculinity, social injustice and racism; they are perhaps the most exciting things wielding six-strings on the Glasto line-up, even if they do forget to play them sometimes...

Bridie Monds-Watson is best known by her stage name, SOAK. Since releasing her 2015 debut, Before We Got How To Dream, on Rough Trade she has played a significant part in reinventing the stale post-Sheeran solo singer-songwriter format. Her songs evolve from acoustic-based roots into rich, multi-faceted compositions, but are still about great writing, insightful lyrics and well-constructed chord progressions at their core.

Meanwhile, the likes of her cover of Bonnie Raitt's I Can’t Make You Love Me still offer those moments of pin-drop-quiet introspection that can silence a room, if required.

Bayonne metallers have gone from being by some way the best metal band to come out of France, to staking a significant claim as the best metal band in the world. There are few other acts that have done so much to innovate and advance the genre, combining elements of death and tech metal and expanding into progressive territory, while still somehow skirting the mainstream.

Their last record, 2016’s Magma, saw the group clean up their act just a little, with guitarists Christian Andreu and frontman Joe Duplantier toning down the distortions, and favouring clean vocals. Gojira still sound brutal, though. Take the caustic burning groove of //The Cell//, which flips into a middle-eight of vicious hybrid picking.

Japan’s inveterate, yet ever psychedelic ‘soul collective’ appears on the West Holts Stage on Friday. Given their ever-transmogrifying sound, which ranges from blissful nap music to hot freak-out within the space of one song, might be the best soundtrack for our fraught – and yet quite warm – times.

Lynchpin guitarist and founder Kawabata Makoto describes his playing and writing style as that of a radio receiver “picking up these sounds” from the ether and channeling them back to his audience. We’re unsure what will be drifting about the Worthy Farm air, but if he at any point starts sounding like a falafel vendor, you’ll know he’s tapped into a Glastonbury vein somewhere.

6. Linz Hamilton (AKA The Marassa) - Vodun

London rock group Vodun, led by former Invasion/Do Me Bad Things vocalist Chantal Brown, combine voodoo vibes and Iommi-esque riffage into mystical jams. Their guitarist The Marassa, known to his mum as Linz Hamilton, has a background in stoner rock but  has ably adapted to his position as the band’s sole melodic instrumentalist, channeling his riff-heavy sound into a monstrous setup of guitar and bass amps via a custom-wired Gibson SG Zoot Suit with dual outputs.

Vodun’s set is at 4am on  the Scum stage. It’s a ridiculous slot, yet sort of the perfect time to be bludgeoned off this astral plane by a cosmic priestess and her riff spirits.

Even a few years back, if you spotted a band like Employed To Serve on the Glastonbury bill your first reaction would be that it was a typo. The Woking group are an uncompromising metallic hardcore band with no scent of rounded-off edges or crossover hits.

Sammy Urwin and James Jackson do not have an off-switch, instead they motor behind the eviscerating vocals of front woman Justine Jones, blending sludge-y riffs and piercing textural flourishes amid some lightning-quick rhythmic trickery. It’s a landmark booking for Glastonbury and an unmissable set for anyone curious about the current state of British heaviness.

Hawkwind played the first Glastonbury Free Festival in 1971, alongside a line-up that included David Bowie, Traffic, Fairport Convention and Gong. They return to the acoustic stage a much-changed act, with only founding member Dave Brock still present from that line-up.

This year, unusually, they play the Acoustic Stage, following the release of Road To Utopia in 2018, which reworked classic tunes in acoustic formats, with the help of an orchestra led by Mike Batt. This being Hawkwind, it’s not that simple and there’s still some electronic work on the album, most notably a cameo from Eric Clapton. The prominent Saturday night slot is a nice nod back to the festival’s roots in a year of significant change.

“My childhood was small, but I’m gonna be big” sings Fontaines D.C. vocalist Grian Chatten on the opener of the Dublin band’s debut album Dogrel. It’s a prophecy getting truer by the day.

The Irish group were often initially lumped in as an afterthought around coverage of the South London punk renaissance, but have set themselves some distance apart from that clique. Guitarists Carlos O'Connell and Conor Curley’s ‘wrangle jangle’ highlights both the rage and tenderness of  Chatten’s vignettes of downtrodden humanity in the forgotten corners of Dublin.

She Drew The Gun is the band vehicle for North West-native and songwriter Louisa Roach. They won Glastonbury’s Emerging Talent competition in 2016 and are back on The John Peel Stage for 2019. Last year’s Revolution Of The Mind, their second album, marked a big leap forward for Roach and co., with the likes of Resister and Paradise gelling their progressive politics with an appropriately forward-looking electro-rock aesthetic, or exploring Coral-like indie sway and pop hooks on the supremely catchy Something For The Pain. The latter’s simple yet awesomely melodic solo is highly addictive.

Another addition to the Earache-curated Scum Stage, Venom Prison are the current and deserved subject of veneration in metal circles. In Samsara, they have released one of the most brutal records of 2019.

Ash Gray and Ben Thomas bring the viciousness of vocalist Larissa Stupar’s rage-laced writing to visceral life. Essentially, it is classic and supremely accomplished death metal – there are blistering blast beats aplenty – but these days the group are finding new space in their writing. For example, the eery atmospherics of Deva’s Enemy and the 80s shred solo on Self Inflicted Violence. It sounds like hell, not just in terms of the musical violence but also the sense of rough justice being served.

Liverpool’s Queen Zee have been compared to Iggy Pop/The Stooges and, indeed, Pop himself is a fan yet there’s also more than a little New York Dolls glam, grunge filth and Sex Pistols snot in the mix.

As Pop himself put it in a much-repeated quote “They’re strange people from Liverpool. I don't wanna say they're dirty, they look a little weird, but they rock like crazy.” Expect aggression, scything tunes an inclusive, unhinged live show, a lot of make-up and not a lot of clothing.

A year on from the release of his acclaimed third solo album Call The Comet, Johnny Marr takes to The Other Stage at Worthy Farm. Marr has spent decades shaping and contributing to more than his fair share of excellent groups as a roving gun for hire, but has recently found new challenge in fronting and writing for his solo band.

It suits him, with the likes of Hi Hello proving he’s comfortable enough to tip the cap to the jangling signature tones of the 80s. Recent sets have seen him pulling from solo records, his work with Bernard Sumner in Electronic and some, err, pointed Smiths selections (Bigmouth Strikes Again, anyone?)