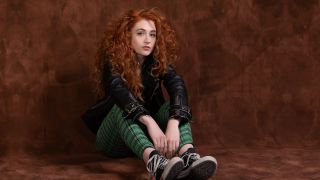 Janet Devlin's new album Confessional is her most ambitious project yet – it's also her most honest with an accompanying book detailing the real life experiences that have fed into its songs. And some will make for uneasy reading. But while that step might sound daunting, for Janet it was a natural and necessary evolution.

"In my personal life, I’m almost always an open book," the Northern Irish singer reveals. "I don’t really mind ever telling people about my secrets or my past. The main challenge was being honest to myself. There were a few times in writing the book that I really had to dig deep to get the words on the page because of the shame I had.

"Also, there were a few songwriting sessions where I cried because of delving into some old memories so probably freaked out my co-writers! I’m glad that I did it all though – I figured that if it wasn’t hard, then I wasn’t being honest enough. Plus while all this was going on I was still releasing music and creating content – a couple of EPs, some singles and hundreds of YouTube videos. I didn’t want to go into hiding!"

Ultimately, it's resulted in the 25-year-old's most compelling songs yet. The album and book, My Confessional, will now be released on June 5. Not that she's stopped searching for the next chapter in her musical story – "I would say I’m constantly striving to write the most honest song I’ve ever written," says Janet. "It’s as if I just want to keep on pushing that boundary but I think it’s healthy! I’m in a much better place now so no topic is too taboo!"

It's this blend of authenticity and work ethic that has found the former UK X Factor contestant (she was just 16 when she finished fifth on the show in 2011) build a YouTube channel with over half a million subscribers. Her own songs, striking openness with her audience in vlogs (including speaking frankly about dealing with her alcoholism and recovery), poetry and well-chosen cover versions she makes her own make her an ideal musician to share their tips for success.

And right now in lockdown, the ability the present your music online has never been more important. And while traditional tours for musicians to promote albums are shelved for now, Janet has already been playing regular streamed gigs via Stageit.

"Already I’ve been hearing so much lovely feedback from people who went to their first one the other day," she tells us. Not that she's new to this kind of thing – Janet was well ahead of the curve and has already played well over 100 Stageit performances.

"I think for now as it’s the only option to get to watch and listen to artists you follow," she notes. "It’s finally making people give it a shot and so far, so great! It will never take over the actual live market because we all know that you can’t recreate the atmosphere of a real gig. But they’re so fun and should almost be seen as completely different entities.

"It’s a great alternative for most but for some people it’s their main source of consuming live music. I’ve spoken to people with conditions that prevent them from going to gigs because as fun as real gigs are, that’s not the reality for everyone – some people can’t be in that sort of environment but would still love to see their favourite artists. Online gigs bridge that gap so that no one is left out."

No musician should be left out of showcasing their music online either. And with that in mind, here's Janet's tips on how you can do it.

1. Nervous about putting your music out there? It gets easier

"I started posting my first songs when I was around 15 years old. I remember the biggest fear was them being heard by my peers. I had no issues with the rest of the world, but just the concept of people in my class hearing them scared me to death! I overcame it by just ignoring the mean voices in my head and by having a good support network of friends who were cheering me on at the time.

"Just remember that everyone’s been there! Everyone has felt that way - even your favourites who make it look effortless. But once you bite the bullet and just do it, it only starts to get easier and you gain confidence, especially when you receive lovely messages of support and praise for what you’ve posted. Those are the messages that matter – ignore the hate. I will admit, I still hate the editing experience BUT even that has gotten easier!"

2. Playing cover versions is a good way of building an audience

"Don’t be afraid of doing the occasional cover. It will help build your community and get people used to your style while hearing a recognisable song. I know people get very precious of only doing originals but you’re missing out on potentially thousands if not millions of people listening.

"It’s easier to fall into the algorithm this way. So if you do covers from time to time, it ups the chances of people hearing your original works. If you’ve built a strong fanbase who like what you do, then they’ll be itching to hear your own stuff and that’s where crowdfunding can help you get your original releases out there!"

3. Choose covers from the heart, not the head

"Choose songs which mean something to you – don’t try to follow a trend or take on something because someone else wants you to. I’m a super emotional person, and I’ve learned to embrace it! I think it’s because when I’m feeling blue, I tend to turn to music to make me feel better and sometimes nothing makes me happier than listening to sad songs.

"Go back to your roots and see what songs bring back happy or sad memories - I would have to say what’s worked for me. I tend to go for songs that make me emotional and that tell a story in my own life, so that the feeling people see and hear in my videos is authentic."

"A ring light is one! Even a super cheap one from Amazon does the job!

The 13 best microphones 2020: our pick of the best mics for recording instruments, vocals and podcasts

If you’re not into setting up soft boxes and perfecting the lighting, this is an efficient way to at least ensure you’re well lit.

"I would also invest in a good editing software - it allows you to do more things in post, so you can focus your time on getting the best take. Finally, a decent USB mic is crucial to get spot-on audio."

5. Don't just assume people will subscribe to your channel

"If subscribers were the main goal, I would’ve quit YouTube ages ago! I would say remember the trusted phrase “If you don’t ask, you don’t get”. It’s been true for me as a viewer – sometimes I forget to subscribe until the creator reminds me.

"So it’s worth just saying it either at the start or at the end of your videos, and remember to include it in your description too – there’s no shame in being proud of your content and wanting to let people know there’s more where that comes from!"

6. Be ambitious… but realistic with video

"I would have to say it’s a case of just trying your best to be realistic but also still dreaming big – this goes for my official music videos especially. When there’s budget limitations it forces you to get more creative, which is only a good thing!

"I’m really lucky to have a studio at my management’s office so I can record vocals and musicians there, but now as we’re in lockdown, I’m having to think outside the box more and am actually quite enjoying the challenge! I would also say early planning helps you get the results you want."

7. Don't be afraid to mix up your approach to videos

"So much can depend on time and budget – some are my bells and whistles official music videos and others are lo-fi content just for YouTube or sometimes IGTV.

How to grow your audience: top tips for music-making YouTubers

When it’s just me and a camera, shots vary depending on whether it’s a good skin or a bad hair day!

"I get bored easily so like mixing things up! Make it interesting for yourself, try different filming techniques or things in post – especially if you’re pushing out regular content. It also helps keep it fresh for your audience."

8. Beware of taking onboard online feedback

"To be honest, I think I would really struggle with keeping any sort of musical direction [based on feedback] as the feedback I get is so varied!! So I have to filter most of it out - I would fear that if I started paying major attention to all the feedback I get, I may start taking on the negative comments too.

"At times it can be hard to decipher what’s creative criticism and what is just someone being rude. I try out the odd song during my Stageit shows to see what sort of reaction it gets – it’s a handy trial environment as you’ll normally get immediate feedback, and normally it’s people saying “Get this on YouTube!”.

"Twitter’s a good way to keep in contact with the people who want to know what’s going on. It also allows you to get to know your followers better too.

"Instagram is great for showing people the true behind the scenes. It’s nice to have the choice of stories Vs feed. If you want to show people the more raw uncut version of yourself - stories are great."

10. Vlogs an help your audience can get to know you

"I started posting vlogs in 2014. It was a choice I made to do it because I wanted people to get to know me as well as my music. At the time, I remember getting laughed at because posting videos then wasn’t really seen as ‘cool’.

"I totally get that it’s not for everyone, but I think it’s a good option to have. It also gives you the chance to be in control of your own story and to show your authentic self – bring people on your journey. And if they want to listen, they will!

"Even if you create a lot and often, I do believe that if it’s good - it won’t get missed! One thing I would say is that keep it varied – you can’t keep churning out high production value videos all the time because a) you probably won’t have the time or money, and b) it will become the norm and people will begin to take it for granted.

"Having a mix of videos really helps to keep interest and rounds you out as a person rather than concentrating on just one side of you."

Janet Devlin's album Confessional and book My Confessional will be released on 5 June 2020. A number of preorder options are available over at janetdevlin.com/store

Janet has Stageit shows on April 30 and May 28. For more information visit stageit.com