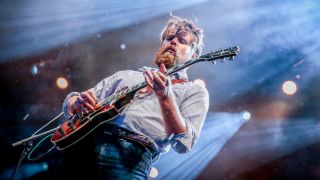 To this day, The Sheepdogs are the first and only unsigned band to appear on the cover of Rolling Stone - so the Canadian classic-rockers must be doing something right.

New album Changing Colours sees frontman, guitarists and (you better believe it) clarinetist Ewan Currie expand the band’s well-established blues roots with Motown brass and Latin percussion, while still retaining the swagger-laden licks ’n’ riffs with which they made their name.

We caught up with Ewan to hear about his prized guitars, why Betts is best and just what to do when an audience member is gunning for you onstage…

“My first electric was a G&L Strat copy - I got it when i was 19 and started the band not long after.”

“Really it's just the good ol’ Boss tuner, ’cause I'm horrible at tuning by ear.”

“When I was starting out and had no money, I dropped 450 bucks on a Silvertone 1484 amp. We were about to go on tour and it was not a very practical touring rig. I took it back the next day and regretted it for years until i bought the same amp in San Francisco for several hundred dollars more and had to check the cab on the plane and carry the head on as carry on luggage in order to get it back to Saskatoon.”

“I'm always on the look out for another good Les Paul, but lately I've been eyeing up the Gibson Explorers from the ’70s. Been trying to find a clean one.”

“I've been working on playing with more subtlety, using more finger and pick control. Starting out, I was a real ham-fisted strummer that relied on pedals too much. Now I look at those guys who just use their volume and tone knobs as kind of my inspiration.”

“Dickey Betts, from The Allman Brothers. He's such an incredible player with expressive solos that incorporate country blues and jazz seamlessly.”

“A big son of a bitch in Prince Albert, Saskatchewan was gunning for me and he tried climbing up on stage, but I just booted him right in the chest with my size 13 boot and he didn't try again!”

“Play more gently and listen to the difference in tone when you dig in versus playing softly. Also, don't play so many damn notes. Space is key.”

Changing Colours is out now via Dine Alone Records. The Sheepdogs tour Europe in June: