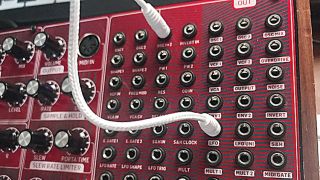 To harness the power of a semi-modular synth, you’ll need to become fluent in the languages these musical devices use to communicate. A standalone analogue synthesiser’s individual sections will be prewired under the hood: turn a knob to alter a particular voltage and change the resulting sound. The individual modules that make up a modular system, however, must be patched together with cables, in order to make those electrical connections manually. These analogue signals are known as control voltages, or CV.

The semi-modular synth is the middleman between the standalone synth and the all-out modular rig. On the face of it, a semi-modular can act as a ‘regular’ standalone synth: all of its connections are ‘normalled’ by default, meaning that you can fire it up and make sounds immediately, no patching required. It’s the inclusion of a patchbay that gives the instrument a footing in the modular world. Grab a fistful of patch cables, make new connections in that patchbay, and you’ll break those default routings to make new ones internally. Or, to go further, shuttle those CV signals
to and from a proper modular system, or even other semi-modular synths.

Put simply, modules output control voltage pitch and/or gate data, and other modules can receive that data. Unlike the universal protocol of MIDI, which can trigger synths polyphonically and transmit multiple messages with ease, a single stream of control voltage data is monophonic. Plus, CV signals aren’t standardised from manufacturer to manufacturer. The more common implementation - invented by Bob Moog - is the linear standard of volts per octave (V/oct) whereby an increase in one volt results in a pitch jump of one octave. Hertz per volt (Hz/V), meanwhile, as used by many older Korg and Yamaha synths, uses a method whereby a doubling in volts equals a rise of one octave. Without getting too bogged down in these technicalities, you need to know which CV standard each of your instruments sends and receives, to ensure they’re talking the same ‘language’.

Aside from ‘pitch’ CV, modular and semi-modular systems also use other types of voltages for general ‘go’ and ‘stop’ messages, known as gate and trigger signals.

First, the gate signal. Imagine a keyboard sending out on/off data to an amplifier module: its voltage is at zero when no key is being pressed and jumps up to max level (say, 10v) when a key is pressed; let go of the key, and the voltage resets back to zero again.

A trigger signal, meanwhile, is like the square-shaped gate, except it’s simply a short-duration spike in voltage that occurs when a key is pressed, say, and resets after a fixed period, regardless of when the key is released.

In the modular world, gate and trigger signals are used to trigger drum machines, restart clocks, reset sequencers and so on. As these are essentially just square-shaped voltages, any square wave signal can act as this basic ‘on/off’ message – for example, many electronic musicians send out a short, sharp rimshot sound from a drum machine to retrigger a synth’s sequencer and keep the two instruments in time.

Once you’ve got your head around CV and how it works, you can begin exploring its endless possibilities. Let’s consider Arturia’s MiniBrute 2, a semi-modular analogue monosynth with a 48-point patchbay. In its default state, the synth’s four-stage ADSR envelope governs filter modulation, the two-stage looping AD envelope affects amplitude, and LFOs 1 and 2 are hardwired to various sections, as indicated by the blue text on certain parameters.

However, by patching these modulators’ outputs into different inputs on the patchbay, you can quite easily replumb the normalled configurations and make fresh connections. Need more control over amplitude shape? No worries - rewire those two envelopes and use the ADSR to shape the volume! Want a parameter value to increase as you play higher up the keyboard? Simple: patch the KBD output into said parameter’s input. This kind of rewiring can quite obviously open up more and more doors for creative sound design.

Using attenuation to control the level of a CV signal

Again, using the MiniBrute 2 as an example, if we patch LFO 1’s output into the Filter Cutoff input, we break the prewired ‘LFO to pitch’ connection, and we can now modulate the filter frequency with the LFO. Simple! However, unlike regular mod matrix patching, we have no control over the amount or depth of modulation - the LFO is constantly at max strength. We can use CV attenuation comes as an intermediary ‘level amount’, though.

Attenuation is useful for controlling the level of any CV signal, which is why most semi-modular synths feature at least one, and why many modular obsessives own at least one dedicated attenuator module.

For more on semi-modular synthesis, pick up the November 2018 edition of Future Music.

Step 1: In this example, we’re using the Behringer Neutron. Over on the patchbay, the synth’s LFO output is plugged into the Osc 1+2 Input, meaning the LFO is modulating the pitch of both oscillators.

Step 2: The problem here is that the LFO is sweeping the full range of pitch up and down, and there’s no way to dial this back. So instead, we patch the LFO Out into the Att 1 Input, then grab another cable and patch Att 1 Out into the Osc 1+2 Input.

Step 3: Now we can use the Attenuator 1 knob on the interface as an ‘amount’ or ‘mix’ control to govern the amount of LFO modulation - pull it back to reduce this pitch modulation.