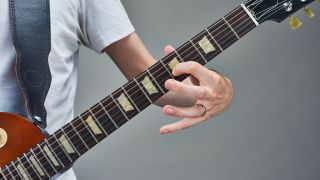 Get creative with your guitar solos as we show you how to cover the farthest reaches of the fretboard...

I tend to get stuck playing in ‘boxes’ when I’m soloing. How can I get out of this habit?

In general, guitarists learn their first solos using simple shapes (aka boxes) like the minor pentatonic scale - shapes which are often based in one small area of the fretboard. This is a great way to get started but as you start to progress it can feel a bit limiting, which brings us to the subject of this lesson: position shifts.

So that means using the whole fretboard…

That’s right! More importantly, you’ll be thinking differently when you come to play a solo. Instead of starting off with a shape or lick you know, you’ll need to start thinking about playing along the length of the strings.

Perhaps. Let’s stick to the A minor pentatonic scale. Take a look at the boxout where you’ll see the scale along the length of the fretboard.

I get it! We’re covering more of the fretboard. Which fingers should I use?

Take a look at the first tab example below. It’s a simple rock lick with a twist. You’ll be starting in the guitar’s open position and moving up as far as the 8th fret. To keep things simple we’ve used notes from our scale box on the right.

It’s quite easy. How about the second example?

This one is a bit of a challenge because you’ll be covering a full 10 frets. Still, you can play the lick using just your first and third fingers, which makes it easier. Sliding from fret to fret also makes those position shifts less of a challenge.

This lick goes up through the A minor pentatonic scale. The numbers in the traditional notation tell you which fingers to use. Make sure to experiment though!

This lick covers even more of the fretboard but this time starts high and goes lower. The diagonal lines denote finger slides - a great way to change fret position.