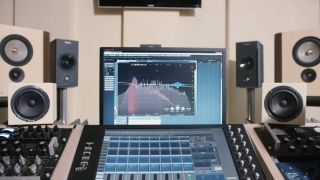 Mixing has come a long way from what it once was. From a hardware-based analogue setup controlled from a console and racks of outboard gear, to the computer-based setup we know today, we’ve seen a lot of changes.

No longer are you limited in the number of channels available, the number of times you can use one processor, or even in the speed it takes to make changes and compare different options. The modern producer has a huge amount of choice in every regard, and the quality of the tools at our disposal would be mindbending to someone working a few decades ago.

Today’s compressors are souped-up and customisable workstations that give you a massive amount of control over every aspect of the way they’re processing sound. Modern EQs, meanwhile, combine workhorse filters with advanced controls like masking detection and dynamic bands, letting you go as far as you want in your tone-sculpting adventures.

Here, we'll explain many of the terms you're likely to come across when using these two most essential signal processors. For the full Ultra-Modern Mixing feature, pick up the March 2019 edition of Future Music.

As compression triggers gain reduction, we usually set a Makeup Gain parameter to re-level the signal. Auto Makeup makes this happen for you automatically, often informed by the average gain reduction that’s going on.

Every compressor (or other dynamics device) consists of a detector and an amplifier in a circuit. The detector measures the signal, and this measurement is used to control the amplifier. On a circuit level, the detector’s input can be taken from before (feedforward) or after (feedback) the amplifier, with its output still controlling the amplifier in each case.

A control to supplement a compressor’s attack and release times, in effect ‘holding’ the gain reduction in the same place after the signal has breached the threshold. With a quick release, a spiky signal might trigger then de-trigger gain reduction in a small space of time. Having a Hold control lets you maintain that gain reduction for longer.

This compression function may still take your selected release time into account, but adapts it slightly depending on the material at hand. The release may be, for example, instantaneously changed for short, transient parts of the signal or for signals with extra bass content.

If a signal is dancing around a single threshold, the dynamics process may switch on and off erratically. Seen on good gates and some compressors, a Hysteresis control lets you set two thresholds - one for ‘on’, one for ‘off’.

A traditional analogue or digital EQ has a side-effect: the frequencies around a band’s cutoff are phase-shifted, which can cause problems. A linear-phase EQ (or EQ band) results in no phase changes to the signal, although there’s a trade-off, as these filter models introduce some ringing, which may not be desirable on transient-heavy material. For this reason, it’s worth having both types of EQ in your arsenal.

An alternative to the Linear-Phase EQ, in which a compromise is struck between the phase-shifting of a traditional EQ and the ringing of a linear-phase EQ.

Setting up a short attack time in a compressor helps reduce transients, but won’t fully work on extreme signals. You need some ‘negative attack time’. Lookahead does just this, reading the signal ahead of time and making gain reduction trigger earlier than the signal actually passes through: useful in mastering to prevent clipping, and in sidechaining to help move a signal aside before the sidechained signal plays.

This EQ band type is a bit like a seesaw, giving you a cutoff frequency, with everything below that frequency being reduced or boosted, and everything above responding in the opposite way. A ‘Tilt Shelf’ band effectively employs opposing low and high shelving EQs that meet at a single cutoff frequency.

A ‘normal’ filter band in a digital EQ, causing phase changes to the audio as a natural consequence of its filtering. For the alternatives, see Linear-Phase and Minimal-Phase filter types.

Think of this control as the threshold above which compression will stay the same. If your Range shows on your input/output response graph, it appears as a 45-degree line after the ratio. In effect, this means your compression is limited to a ‘range’ a certain amount below 0dBFS, and anything louder than that range will see the exact same amount of gain reduction, regardless of how high its level goes over the threshold. This can be useful for letting the highest peaks of an audio signal pass through unscathed, depending on your attack/release timings.

By definition, in stereo audio, left and right channels carry different info, but when compressing audio, we just dial in one set of controls. By default, the most basic theoretical compressor is triggered by any of the right/left channels, but changes the gain of both at the same time. To gain more independence, ‘unlink’ the two channels, effectively doubling the compressor into two - on the left and right channels - with the same controls to set both. Which to use? If you don’t want a loud sound coming from the left to trigger compression over the tiny details on the right, you may be after an unlinked response. On the other hand, an effect reacting to both channels in the same way will have a more ‘gluing’ outcome.