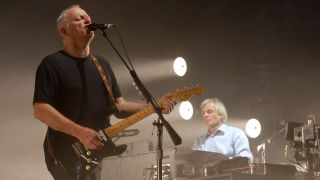 Guitar skills: Although he's perhaps best known for his tasteful lead playing, David Gilmour pioneered his fair share of inventive chords throughout his time in Pink Floyd. Here's a smattering of his finest shapes to get your fingers round…

Don’t just strum this one - if you do, you’ll miss out on all of its menacing power.

Pluck the notes in an arpeggio pattern, and you have that instantly recognisable hook from a very famous Pink Floyd song. Are you shining yet?

This variation on an open Em7 shape is found in the song Dogs From Animals.

We’ve shown it in standard tuning, but on the recording, Gilmour is tuned down a whole tone, so it’s actually Dm9.

Here’s another one that benefits from a stately arpeggio treatment. It’s the first chord from Us And Them, and for the next chord, just move the shape up two frets (leaving the open D string static). Who said prog was complicated?

You’ll need to tune your bottom E string down to D for this one; it’s the wistful first chord from Goodbye Blue Sky. Look, Mummy, there’s an aeroplane in the sky…