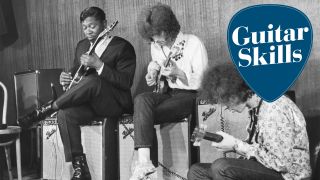 The pentatonic scale made easy with three chord shapes

All you have to do is rapidly bend a string up and down with your fret hand. Not by much - just enough to create a fluctuating, warbling sound effect.

Players such as BB King, Brian May, Slash, Eric Clapton, David Gilmour and Yngwie Malmsteen each have their own unique vibrato sound - some are slow and wide, others are faster, with less pitch change.

Although there is no such thing as a ‘correct’ vibrato, a lot of less-experienced players tend to just wobble a fretting finger and see what happens.

But, like every guitar technique, a little practice and some different musical ideas will improve your ability, and, most importantly of all, help you develop your own personal touch on the guitar.

Play the note on the 10th fret with your second finger and use your first, third and fourth fingers in turn to fret the notes on the first string. Allow the notes to sustain a little before applying your vibrato. Rather than using your fingers to push the string up and down, move the string by turning your wrist.

As with the first exercise, move your whole hand from the wrist in order to move the string, and lock the side of your first finger knuckle under the neck for a stable grip. You’ll be playing bass strings here so pull the string down towards the floor to adjust your vibrato.

Play the 12th fret diad with your first finger, gripping both strings with an even pressure as you wobble the strings. Try making your vibrato sync to the tempo of the music – use either three or four vibrato pulses for each beat of the backing music. In bar 2, use your third finger to play the 14th fret diad.

If you’re after a soaring, uplifting lead guitar lick then this is the technique for you. It’s tough though, as you’ll need enough finger strength to bend a string and apply vibrato at the peak of your bend. We recommend adding your vibrato by dipping down slightly lower than the note you bend up to.

Once you’ve tried the tab exercises and also had a go at creatively adapting them in different areas of the fretboard, you’ll develop a feel for how to choose the most suitable fingers or hand position for whatever you happen to be playing.

Experiment by trying one or two of these vibrato methods in your next jam. It could be as simple as adding more emotion to a few notes in a riff to make it more dynamic, or giving a melody note a longer sustain.