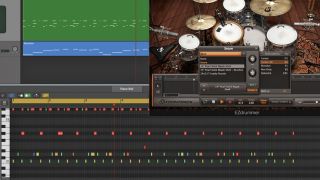 With today’s multisampled drum kits capable of exquisite levels of detail, authentic jazz drums are genuinely achievable within the confines of the software-based studio. And while jazz itself - by which we mean modern, not trad for this particular tutorial - might come across as too intellectually demanding for those untrained in its arcane ways to pay any mind, the fundamentals of jazz drumming are easily learnt, and understanding them can have a profound effect on your approach to drums and beats in general. Thus, it’s a subject well worth exploring.

When putting together a virtual jazz drum track, your choice of sampled kit will have an obvious impact on the results. If you don’t have access to a specifically jazz-orientated library, such as Toontrack’s Jazz EZX, which we’ll be using here, try and find something open, organic and natural sounding, with a rounded, bouncy kick drum, pitched-up snare and warm, washy ride cymbal - not punchy, overly bright or heavily processed.

Equally importantly, programming or snapping MIDI jazz drums to grid is a definite no-no. Jazz is all about human feel and rhythmic nuance, so your drums need to be played live, preferably on pads rather than keys. You don’t have to play the whole kit at once, however (all the better if you can, though) - overdubbing layer by layer is absolutely fine, as we’ll demonstrate.

In this tutorial, we’ll be recording a jazz drum ‘comping’ pattern - that is, the unobtrusive, supporting line that the drummer plays underneath the other instrumentation; the equivalent of the main groove in a pop track, say.

Step 1: Let’s start by giving the drums some context: a walking upright bassline of sorts. We’ve recorded this in live, rather than programming it - jazz should never be snapped to the beat. For true jazz authenticity, you’ll want to record one continuous drum part through the whole track, of course - a genuine live performance. In the interests of practicality here, though, we're capturing an eight-bar loop.

Step 2: The most important element of the drum kit in jazz is the ride cymbal, which constantly plays that characteristic triplet-based or dotted-note swing pattern: quarter-notes on every beat with extra hits on the third triplets of beats 2 and 4. The swung hits should be quieter than the main beats and lead into them - try to feel the rhythm and dynamics rather than thinking about it too hard.

Step 3: Unlike every other style of music involving the drum kit, the hi-hats in jazz are pedalled rather than struck with the sticks the vast majority of the time. When comping, you’ll just want them clamping down on beats 2 and 4, at moderate volume. For a laid-back feel, play them very slightly behind the beat.

Step 4: When comping, The kick drum usually plays very quiet quarter notes if anything at all - it’s often left out of the main pattern almost entirely, and used solely for accenting - so we simply record low-velocity hits on every beat of the bar. They’re barely audible, but you’d just about notice if they weren’t there.

Step 5: While the ride cymbal emphasises the swung third triplet on beats 2 and 4, part of the role of the snare drum when comping is to provide the same emphasis on beats 1 and 3. In its most basic form, this just means landing low-velocity snare hits on the third triplets of those two beats, with occasional harder hits providing accentuation as the mood and other instrumentation take you.

Step 6: For even more forward momentum, play quiet - almost ghost note level - snare hits on the second and third triplets. You can also fill the triplet gaps in between the main and swung ride cymbal hits with ghost snares. How often you do this will depend on the track and the level of busy-ness you’re shooting for.