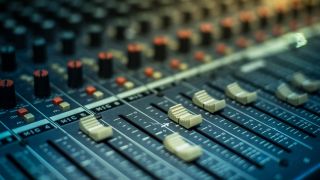 Mixing music in 5.1 surround is exciting, but the price of equipping your studio for the task might seem prohibitive. If you limit yourself to professional equipment, things can get expensive quickly. Does that mean that 5.1 surround mixing is the exclusive domain of the rich and famous, or is there a way to do it on a real-world budget? By adding some consumer gear to your existing project studio, you can mix 5.1 surround for a lot less than you might think.

To monitor 5.1-channel surround music in your studio, you need five full-range speakers and one subwoofer, amplifiers for the speakers and subwoofer, a volume control with bass management, and a Dolby Digital/DTS decoder so you can check that the final surround encoding worked.

Fortunately, a modern home-theatre receiver (also called an A/V receiver) takes care of those major monitoring requirements (except the speakers and subwoofer) in one fell swoop. All home-theatre receivers include Dolby Digital or DTS decoders (or both), which accept a digital bitstream from a suitably encoded disc in an appropriately equipped DVD player and then convert it to six audio channels. In the studio, that conversion ability is important only for checking a file that has been encoded; it is not used during the mixing process. However, make sure that your receiver has both decoding types, just to cover your bases.

More important for mix monitoring, all A/V receivers provide amplification for the five main channels, but few include an amplifier for the subwoofer, which means you'll need a powered sub. Many receivers also include preamp outputs, which let you use external amplifiers or powered speakers.

A large knob controls the volume of all six monitor channels simultaneously, and a bass-management filter directs frequencies below a certain point in the main channels to the subwoofer. Basic receivers have a fixed bass-management frequency (typically 80 Hz), but more expensive models let you select from a list of cutoff frequencies. To gain access to that and most other parameters, the receiver must be connected to a video monitor so you can see its on-screen-display (OSD) user interface.

For project studios, it's important to use a receiver with six discrete analogue inputs. Those inputs are intended for the new DVD-Audio and SACD players, which have six analogue outputs. In the studio, however, those inputs are perfectly suited for accepting the 6-channel output from the mixer or multitrack mixdown deck for monitoring purposes.

Basic A/V receivers that provide 60W of amplification per channel can be purchased for less than $300. You can also spend$1,000 to $1,500, or more, for a high-end receiver with time-delay correction (which compensates for speakers placed at different distances from the listener), calibration microphones(for automatically adjusting speaker levels), variable frequency bass-management filters, and other bells and whistles. Many companies make excellent receivers; check out the offerings from Denon, Kenwood, Marantz, Pioneer, Sony, Technics, and Yamaha.Fig. 1 illustrates how to integrate a home-theatre receiver into your surround-mixing system.

If your mixer outputs signals at +4 dBu, you need to know that consumer receivers are designed to accept -10 dBV signals at their inputs. To convert from +4 to -10 levels, you can build a simple resistive pad (see Fig. 2). If you're not ado-it-yourself type, you can get a Line-Level Shifter from Ebtech (www.cymation.com) for about $200. That handy device changes the signal levels of eight outputs from -10 to +4 and vice versa. It also automatically converts from balanced to unbalanced (and back again) depending on whether you plug in a TRS- or TS-phone plug.

I don't like to use consumer speakers for mixing in the studio because they tend to colour the sound, which can disguise the real mix. I recommend using inexpensive passive studio monitors that connect to the speaker outputs of the home-theatre receiver. You probably already have a pair of nice monitor speakers, so you might be tempted to simply add three less-expensive, alternate brand or model speakers for the centre and surround channels. Don't succumb to that temptation; the best thing to do is match all five speakers.

For those on a budget, I recommend something such as the Alesis Monitor One MkII ($299 per pair). If you have a pair of the original Monitor Ones, buy three MkIIs for the front left, centre and right speakers and move your original Monitor Ones to the left and right surround positions. Other possible choices for monitors include the Roland RSM-90 ($199 each) and the Tannoy Reveal ($399per pair).

A powered subwoofer is a must, because few if any, receivers provide amplification for the low-frequency effects (LFE) channel, and many powered subs are available for a reasonable price (see the sidebar, “Subs for Sale”). Buy a sub with as much power as you can afford; after all, it has to handle the LFE channel and the bass frequencies in all five main channels. Go for at least 100W, but the more the better.

Calibration on the cheap

Once you have the receiver and speakers set up, it's time to calibrate the system. You can get a nice real-time analyzer (RTA)for $1,000 to $2,000, which makes calibration a piece of cake. But that's a lot of money when you can do the same basic job with a $50 Radio Shack sound pressure level (SPL) meter, which thousands of recording studios worldwide have embraced as the cheap alternative to a high-priced RTA.

Adjust the output level of each speaker while playing pink noise through it. Nearly all modern A/V receivers include a built-in pink-noise generator for setting the speaker levels properly. When that function is engaged, the pink noise automatically cycles from one speaker to the next at a predetermined rate, which means you may have to let it go around the room several times before you get the levels right.

Prior to beginning calibration, make sure that the correct amplifier channels are hooked up to the appropriate speakers. There's no better way to ruin the sound of your mix than by accidentally swapping the surround and front speakers, but I've seen it happen time and time again. So make sure everything's connected with the correct polarity from the receiver to the speakers.

Start calibrating by placing your SPL meter at the centre position where your ears would normally be, pointing it directly at the speaker that is playing the pink noise (only one speaker at a time should be making noise). Modern receivers include parameters that let you adjust the level of each speaker in their OSD controls. If you're using five matched speakers equally spaced around the mixing position, the gain settings for the left, right, centre, left surround, and right surround should all be the same, but the bottom line is that the SPL meter should read the same level from all five speakers (use C weighting). For movie sound, the generally accepted level is 85 dB SPL with the receiver's master volume set to 0 dB, but that's not critical for music.

The best studio monitors 2020: affordable and high-end studio speakers for musicians and producers

Once your receiver and monitors are properly calibrated, verify that your mixing console is connected properly and calibrated. Start by injecting pink noise from a signal generator, test CD, or the console's built-in generator into a single channel strip. Patch the strip to all six surround output buses equally. (I typically set the console to individual-send mode rather than using the joystick or pan/fader steering). Then set each channel send to unity gain. The surround bus output faders should also be set to unity gain.

Next, go back to the input strip and set the trim so that the output level is -20 dB on the console's meters. That is called -20 decibels full scale (dBFS). Finally, make sure that the mixdown deck is also showing -20 dBFS on all six tracks; if not, trim the console's ADAT or TDIF outputs or the tape deck's input levels.(The LFE channel only gets an extra 10 dB of gain in the final monitoring part of the sound chain, not the recording path.)

Modern A/V receivers include a parameter that lets you specify your main speakers' size — small or large. That setting determines whether the receiver's bass-management function is engaged. If you specify large speakers, the bass frequencies will be routed directly to the speakers without passing them to the subwoofer. But if you specify small speakers (even if your speakers are physically large), the bass below 80 Hz will be pulled from the main channels and redirected to the subwoofer, which is exactly what you want (unless you're using big speakers that reproduce down to 20 Hz at full level).

You want to enable bass management so that any bass problems can be heard and corrected. In a 5.1 surround, music mix, you don't need to put audio in the LFE channel. Any bass in the main channels will be routed to the subwoofer during playback anyway and at the proper levels. I've done music mixes with nothing in the LFE channel that has tremendous bass during playback. Nevertheless, what you put in the LFE channel is your business as long as you calibrate it properly in your studio.

Surround mixing needn't cost you an arm and a leg. With a consumer A/V receiver, five inexpensive monitors, a powered subwoofer, and a Radio Shack SPL meter, you can turn your stereo studio into a surround room for much less than the big shots typically spend. All that's left to add is your creative genius, and you're on your way toward the future of recorded music.