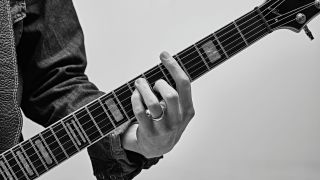 Try one of the guitar’s most versatile techniques and learn to apply fret-hand muting to a mix of genres...

“I see we’re doing muting again! Didn’t we look at this before?”

Sort of! We've already looked at palm muting; this time, it’s fret-hand muting. We’re not retreading old ground. This is a different technique that allows you to play in cool, creative ways.

Well, you probably know that resting your fingers on the strings deadens the sound - provided you don’t fret any notes, of course. You’ve probably also noticed that the strings don’t go completely silent. Strike the ‘muted’ strings and you’ll hear a chunky, percussive sound. Give it a go! If you’re plugged in it’ll sound best with some distortion.

“It’s really easy! It’s not very musical though. Does anyone really do this?”

Yeah, you’ll hear it a lot, especially in rock and metal. The riff in Nirvana’s Smells Like Teen Spirit swaps between clean and muted chords, Radiohead’s Creep features a muted ‘chchunk’ before the choruses, and Guns ’N Roses’ Mr Brownstone opens on muted strums. Percussive acoustic players like Newton Faulkner and Mike Dawes use muting as ‘drum’ strikes on their guitars too. Generally, though, this technique is used in a more passive way, often to punctuate chord changes.

“Got it! Let’s play some guitar then.”

Our first example is based on powerchords. Easy enough, but notice the ‘X’s in the tab - these denote fret-hand muting. Don’t lift your fingers; just release pressure from the strings to produce a dry, chunky sound. “The muting is tricky. Some of the strings are still ringing out.”

Try to rest your fretting fingers against the adjacent idle strings - this’ll mute them out for you. Also, it’s easy to strum too hard, so try to target only the strings in the chords. Incidentally, if you’re struggling with the rhythm take a look at the boxout on the right. This’ll help you sync your strumming with the timing of the riff.

“Can we try another style of music?”

Sure! Our second example can be applied to soul-, disco- or funk-based riffs. Think Chic, James Brown or Red Hot Chili Peppers - you could apply this idea to all of them. Once again, you’ll need to release finger pressure on the notes marked with an ‘X’. It’s a tricky one though, so practise slowly to begin with.

This month’s riffs use ‘16th notes’. They get their name because you can have up to 16 of them in a row in a bar of music in 4/4 time. If you can synchronise your pick strokes with the 16th notes, you’ll nail the timing.

In sheet music, four 16th notes in a row look like this.

Sometimes they’ll be the other way up but they’re still 16th notes.

16th notes are pretty quick, so play down up down up to stay in time.

Keep your down-up movement going, even when some of the notes aren’t played.

Release finger pressure but keep touching the strings wherever you see ‘X’s. A distorted tone will help but don’t overdo the gain.

Switch to a clean tone here - the clearer sound will help you focus on playing accurately. Maintain a steady down-up picking movement.