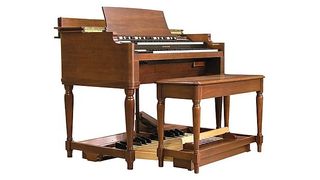 When it comes to playing Hammond B-3 organ in a rock band, there’s a lot of history to be aware of. If you’ve been playing a B-3 or clone in a band, you’re probably familiar with at least some of the most commonly used settings.

Back in the 1950s and 1960s, some jazz organists in particular, liked to keep their organ settings a secret. Make sure to check out the Hammond settings of those players that came before you, as there are many secrets there to be discovered.

Here are a few of my own secret settings I’ve picked up over the years - with some for beginners and some for more advanced players. The following examples should serve mainly as starting points for your own organ explorations. I am constantly tweaking my sound during a performance, nudging drawbars in and out as I play. As you get to know the B-3 terrain better, you will be too!

Ex. 1 illustrates a passage that uses the 88 8800 000 setting. The first four drawbars on the Hammond B-3 are often called the “power” drawbars. When you want to come out swinging with the guitars, use them! The second drawbar labelled 5-1/3', is a perfect fifth above the fundamental. This “fifth flavour” gives the tone some heft, like a power chord on an electric guitar. (Imagine playing a power chord on guitar without a fifth in it)! It’s the second drawbar that provides that power inside each note. You can add some upper harmonics to make the organ soar over the guitars, with the Leslie’s fast speed providing some wind for your sails. And here’s a tip from the great organist Booker T. Try adding some C3-setting chorus vibrato to your fast Leslie passages. It will make things sound even more animated and aggressive.

If you omit the second drawbar on the B-3, you aren’t necessarily consigning yourself to wimpiness. As in Ex. 2, you can get a stately, churchy grandeur out of the even harmonics, which correspond to the white drawbars (with the exception of the first drawbar, or sub-fundamental). Add more white drawbars on top and you’ll be bombastic enough to be in a cathedral (or an early-1970s Genesis album, take your pick)! Special shout out to the great Verden “Phally” Allen of the classic British 1970s band Mott the Hoople for his tone on their smash hit “All the Young Dudes.” As the keyboardist in ex-Mott vocalist Ian Hunter’s band, I always got a shiver up my spine when I played Phally’s Hammond part on this song.

3. One headlight, one harmonic

If you want to sound understated, sneaky, haunting, or evocative, try pulling out just one drawbar, as illustrated in Ex. 3. The third drawbar is the fundamental, so it’s a good place to start. You can sneak this in under acoustic guitars on a mellow tune, or have it well up in the dramatic pauses of a power ballad. If you want your sound to build gradually as the song builds, you can sneak in the fourth drawbar later in the song, which is one octave above the fundamental. This will feel like a natural progression and evolution from the sound of the one drawbar. Listen to the work of organist Rami Jaffee on the Wallflowers’ 1996 hit “One Headlight” for an example of how effective a subtle Hammond tone like this can be. Add-in some higher harmonics if you like a little whistle on top.

It never hurts to ground your rock in a little classic R&B, as seen and heard in Ex. 4. I had a “Eureka” moment one day when I discovered this drawbar setting used by Charles Hodges on many early 1970’s hits by Al Green, including the classic track “Love and Happiness.”Without vibrato and with the Leslie on slow, this setting sounds spacy, icy and hollow. But add some C3-setting chorus and switch your Leslie to fast, and you are authoritatively in the world of “gutbucket” R&B. Try some stabs with this one, either preceded by or followed by a glissando (or both). And if you have built-in reverb (pre-Leslie), add it in to make things downright “spooky.” If the tone is too bright for you, push in the seventh and eighth drawbars a bit. Pull out the third drawbar if you need to get powerful later in the song – you’ve already got the magic second drawbar out, so you just have to add some more muscle on top from the power drawbars and you have all the authority you need for soulful rock organ.

Ex. 5 illustrates a B-3 setting where the fundamental is combined with the four upper drawbars. While this setting is sometimes called the “skating rink” tone, it’s really just misunderstood. When you use this tone in the right musical context, you soar joyously above the fray. Think of Al Kooper’s B-3 part on Bob Dylan's 1965 classic “Like a Rolling Stone.” There is a kind of grandeur in this tone too, like a little brother of the “8088 variations.” This sonority is often used by gospel and jazz organists, and in this context, its “churchiness” makes it speak as a bona fide voice of righteous indignation. Adding C3 chorus will make it even more righteously angry!

“For authenticity, whatever reverb you use should be inserted pre-rotary effect, and should be of the spring type,” says Andy Burton. Burton has toured the world playing Hammond B-3 (and other keyboards) with Little Steven and the Disciples of Soul. He has also performed with artists like John Mayer, Cyndi Lauper, Rufus Wainwright, Curtis Stigers, Ian Hunter, and Robert Plant.