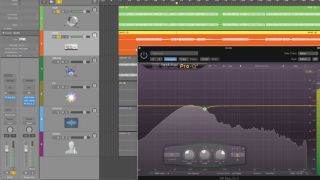 The term 'stem mastering' is something of a buzzword at the minute. Essentially, it involves the mix engineer exporting a collection of five or six stems - say, vocals, kick, bass, drums, guitars and music - rather than a stereo mix, and sending them to the mastering engineer, who throws them into a session and masters the song with a greater degree of control and detail.

It's what all the cool kids are into these days, so you'd best get yourself up to speed with our guide.

Step 1: In our ‘finished’ mix session, we’ve routed relevant elements into six groups: kick, bass, drums (minus kick), synths, vocals and FX. We then solo each group and export it to a stem file, ensuring that the project’s auxiliary effects are included in the signals.

Step 2: Next, we import our six stems into a fresh project. The stems align perfectly, and the track plays back as it should. The temptation here is to dive into each channel and start processing, but instead we’re going to head straight to the stereo output and master the track as we would with ‘regular’ mastering…

Step 3: After applying EQ, compression and limiting on the master bus, it’s clear that our lead vocal is a little too quiet in the mix. Instead of trying some master bus trickery as a workaround, the stem mastering approach allows us to simply head to the vocal channel and turn it up by a dB or so.

Step 4: The limiter on the master bus is tripping some subtle distortion when the kick and bass play together. Again, this would have been tough to solve if we were mastering a single stereo premaster, but we now have the ability to address the problem on the kick and bass channels.

Step 5: One particular sweep sound within the FX stem is jumping up into the mix, and sounds overly loud. Again, stem mastering makes it easy to address - we simply automate a gain plugin on its channel to turn the sound down a tad.

Step 6: Overall, the aim with stem mastering isn’t to creatively alter the track, but instead master it with a little more control than a stereo premaster allows. Once we’re happy with our master, we export the track as a 24-bit stereo file, ready for output.