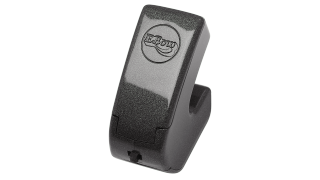 Guitarists have been envying the sustain capabilities of other instruments probably since the first picker heard the extended notes of a pan-flute, violin, or church organ. With the advent of the electric guitar, the instrument’s sustain was enhanced by loud amps, distortion, fuzz, and compressor pedals, but it was the arrival of the EBow that finally allowed guitarists to hold a note indefinitely.

The EBow is the original monophonic handheld electromagnetic string driver. It was invented by Greg Heet in 1969. Using a sensor coil, driver coil, and an amplifier, it employs electricity to vibrate one string at a time, producing a sound like bowing — hence the name. The current generation of Ebow allows you to switch to a second mode that produces a higher harmonic instead of the fundamental.

Soon after its introduction to the market, Steve Hackett of Genesis employed an Ebow on “Carpet Crawlers” from The Lamb Lies Down on Broadway. Ever since, the EBow has since enhanced string sustain for everyone from Queen to Queens of the Stone Age.

Processed through distortion, modulation, delay and reverb, and/or overdubbed through loopers, this small object can create massive electronic soundscapes, and with more and more modern players seeking new sounds, the EBow has seen a surge of popularity. Such interest was bound to encourage other manufacturers to enter the market, and TC Electronic has joined the field with the Aeon.

The Aeon also uses transducers to excite the strings but then the design veers off in a different direction, addressing three weaknesses of the EBow.

The Aeon’s brushed aluminum enclosure is more durable than the EBow’s plastic one, and its simple battery slot improves on the latter’s battery hatch, which can often pop off and/or break after dropping. Second, the Aeon’s recessed power button is unlikely to be turned on or off accidentally, unlike the flimsy toggle of the EBow that can inadvertently be engaged in transport, draining the battery before the gig. And third, in the rare case that you should accidentally push the Aeon’s button or forget to turn it off, the device automatically shuts down after it is unused for eight minutes.

The Aeon’s shape ensures a firmer grip, like holding a pencil. At first I feared its elongated profile would make it too unstable for tabletop guitarists who like to place an EBow on one of the strings. But the deep grooves of the Aeon kept it firmly in place. Its thinner profile and cheaper price should appeal to those who wish to use multiple sustainers side by side when they lay the instrument flat.

How does the sound compare? The EBow definitely puts out a stronger field, which makes it easier to get the vibrating started and seems to make the tone fatter and darker as well. I found the Aeon’s thinner sound improved with distortion and processing, though you may find it merely a matter of Les Paul versus Stratocaster.

Once the Aeon gets going it works well but starting up requires some pressure, whether from your hand pushing it down on the string, or its own weight when the guitar is lying flat. This, combined with its slightly deeper grooves, rules out the sweeping arpeggios possible with an EBow. Still, the variation in volume that comes with pressure allows an expressive up and down tremolo, as opposed to the EBow’s less sensitive sliding along the string variety.

Despite its flaws, the EBow’s rich, powerful sound makes it an essential tool in any electronic guitarist’s sonic palette. For those wanting to enter this world at a lower price point, or to add a second sustainer with a different tonal color, the Aeon is an attractive option.