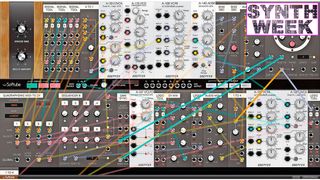 SYNTH WEEK: Once at the cutting-edge of musical technology, synthesizers have made a comeback in movie and TV soundtracks. Consider SURVIVE's soundtrack for Stranger Things, which bears comparison to other iconic synth soundtracks.

But in today's digital studios, an analogue-style sound isn't just a consequence of the gear you use; you have to actively create the personality of a classic music rig. And with these eight tips, we're here to help you get it right.

If you want your soft synths to ‘behave’ more like their analogue forebears, switch off internal effects like reverb or delay. Classic synth soundtracks might sound deeply atmospheric, but analogue synths almost never included spatial effects, with artists most likely relying on separate reverb processing. They might have featured doubling effects like Chorus and Ensemble, though, so laying these on thick might be a better route to an authentic analogue soundtrack vibe.

The synth soundtracks of the past that had the most impact used original sound design. After being given so much exposure over the years, rudimentary analogue synth patches have become something of a trope. Be unique with your sounds and your productions will be stronger for it.

3. Use modular setups for unique sounds

If you’re working with plugin modular systems like NI’s Rounds, Softube’s Modular or hardware Eurorack components, think creatively. Understanding synth modules and their ‘traditional’ flow is important, but once you’ve got basic theory mastered, be brave and look for unpredictable connections.

Not all sound generated from some external hardware can be controlled using MIDI, but that doesn't mean that hardware instruments and effects shouldn't be used. Celebrate the inaccuracies of an instrument being played live; as this is a huge part of the feel of synth soundtracks.

Quantisation is a MIDI-era function which we’ve enjoyed (and come to take for granted) only since MIDI sequencing became popular. As synth soundtracks from the 70s didn’t enjoy the luxury of timing correction, there was a greater emphasis on ‘performance’.

Listen to Vangelis’ soundtracks and you’ll hear that a ‘downbeat’ produces a cluster of notes, with some arriving early and others late. There’s an extraordinary humanity in the effect this creates. Humanity can be at the heart and soul of your score.

When aping the sonic characteristics of other eras, don’t just concentrate on the synths themselves –  the recording technology available to synth pioneers of the 1970s was multi-track tape based, with a slow and steady evolution from four to eight to sixteen-track tape.

We take crystal-clear, digital signals for granted these days, so perfecting the sounds of yesterday will require some creative degradation. In particular, experiment with tape simulators and gain plugins whose topology is based on classic 70s consoles.

Just like 70s and 80s synths, 70s and 80s reverbs are sonically distinctive. The reverb processors of the day were not the shiny sounding reverbs we enjoy today with their pristine sound and impulse-response-perfect clarity. Instead, they were algorithmic, artificial and often noisy, due to operating at lower sample rates than their modern equivalents.

So experiment with EQ, to roll off the top end and perhaps some frequency content at the bottom too. Try adding sample-reducing plugins after your reverbs to ‘lessen’ their quality, or putting distortion or saturation effects – subtly – afterwards too.

30 or 40 years ago, synths were rarely capable of playing more than one sound at a time (although keyboard splits did allow for separate ‘bass’ and ‘treble’ instruments in some cases). Equally, polyphony was restricted, many synths were monophonic and even those which weren’t would – at most – be capable of playing just a few notes at once.

Many of the arrangements and recordings from that era are stronger for their sparseness, so try to keep your arrangements down to just a few tracks, built mostly from single monophonic lines or just a few notes, per instrument.