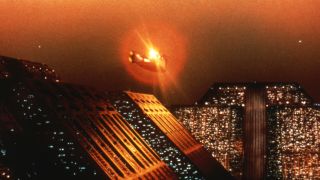 Filmmakers and synthesisers have had one hell of a fruitful relationship over the years.

It's hard to imagine how low-budget sci-fi and horror would ever have survived if film composers didn't have the imposing, otherworldly and, crucially, relatively cheap sounds of synthesisers at their disposal. On the flip side, pretty much every technological advancement in electronic music can be traced back to an early champion working in the realms of film and TV sound creation, many of whom were often decades ahead of their pop music counterparts.

In celebration of this mutually beneficial relationship, we've compiled a list of nine of our favourite synth-led film soundtracks. Have we missed out any of your favourites? Let us know in the comment section below.

Vangelis' Blade Runner score might just be the pinnacle of synthesiser soundtracks. It seamlessly blends orchestral elements with vintage synth sounds (and the occasional sax solo) to create a mood that treads a line between old-fashioned noir suspense and bleak, dystopian futurism, perfectly mirroring the retro-futuristic feel of Ridley Scott's sci-fi classic.

The core of the soundtrack was primarily composed using a Yamaha CS-80 and Roland VP-330, interspersed with elements played on a Fender Rhodes to add an element of classic romanticism to the sound.

Fittingly, there are almost as many different versions, edits and bootlegs of the soundtrack kicking about as there are re-cuts of the film itself.

The soundtrack to Francis Ford Coppola's 1979 Vietnam epic is probably most commonly remembered for its iconic uses of Ride Of The Valkyries and The Doors' The End. But behind these moments of inspired synchronisation lies an impressive and imposing synth-driven soundtrack created, for the most part, by Coppola himself and his composer father Carmine.

Their compositions for the film are both otherworldly and threatening; a strange concoction of ethereal atmospheric noises and bursts of intrusive, Moog-like synth chords. It all helps to build a sense impending doom, detaching the narrative from reality as the film makes its increasingly hallucinatory journey up river.

Essentially we could include just about any John Carpenter film in this list. His self-composed, home-recorded synth soundtracks are as much a defining characteristic of his filmmaking style as any of the cinematic or narrative tricks he's known for.

Assault On Precinct 13, Escape From New York and Halloween all feature impeccable soundtracks composed in his distinctly lo-fi, drone-inspired style. The Fog is a personal favourite of ours however, featuring some of his most moody and atmospheric sonic creations. Plus, the commercial release opens with the same campfire ghost story as the film itself - and everyone loves a ghost story, right?

Former Red Hot Chili Peppers drummer Cliff Martinez has, since stepping away from the rock music world in the late-'80s, emerged as one of Hollywood's finest modern composers. While he's a number of impressive soundtracks to his name - his score for Steven Soderbergh's version of Solaris is a definite career highlight - his work on Drive stands out as one of the finest cinematic synthesiser moments in recent years.

Scottish electronic musician Jon Hopkins has worked with Brian Eno and is a vocal fan of Cliff Martinez, and you can hear the influence of both coming through on his brilliant soundtrack to indie sci-fi movie Monsters. The film's score is perhaps less overtly sythesiser-driven than others on this list - as is the case with Hopkins' albums, there's an earthy, natural quality rooted in acoustic percussion and piano parts. Yet at its core the whole thing is based around subtle synthesised drones and looping delay effects that reveal Hopkins' impeccable skill for creating gorgeous, humanised electronic music.

With their ambient-leaning, electronic soundtrack for David Fincher's account of the creation of Facebook, Nine Inch Nails mainman Reznor and English musician Ross do an excellent job of building a sense of impending doom through simple repeated motifs and menacing, droning synths.

The soundtrack also features a synthesised reworking of Edvard Grieg composition In The Hall Of The Mountain King, an idea that apparently came from Fincher directly, as a tribute of sorts to Wendy Carlos' work on A Clockwork Orange. Speaking of which...

Wendy Carlos (actually credited as Walter Carlos here, being pre-sexual reassignment at the time) is a true synthesiser pioneer.

Her contributions to Kubrick's controversial masterpiece have their roots in her earlier work, Switched-On Bach, which saw Carlos piecing together renditions of pieces by Bach performed on a (then-barely known) Moog synthesiser. In a similar manner, her soundtrack to A Clockwork Orange is focused around weird and alien-sounding electronic reworkings of well-known classical pieces. It acts as a strangely logical bridge between main character Alex's disconcerting obsession with the work of 'Ludwig van' and the fantastical, futuristic look of Kubrick's film. The soundtrack also features one of the first ever recordings of a vocoder.

Day Of The Dead

Filmmaker and composer John Harrison's soundtrack to Romero's zombie classic is a real product of its time. It's packed with early synth-pop motifs, weird funk basslines, shuffling percussion and undertones of eighties power-balladry. It, perhaps, sounds a little naff to our ears now, but it's still hard not to love it.

Wikipedia informs us that the Italian bloke off the Daft Punk album used to do music himself back in the '70s and '80s, including the odd film score.

As with many of the other composers on this list, Moroder has plenty of impressive soundtrack work to pick from. The Chase, from Midnight Express remains one of his most influential works, whilst his contributions to Scarface (and by proxy Grand Theft Auto: Vice City) are iconic sonic embodiments of overblown '80s excess.

American Gigolo is probably our favourite of Moroder's OSTs though. Aside from the fact that it spawned his excellent Blondie collaboration Call Me, the film's soundtrack is packed with a mixture of sleazy synth horn sections, weird bleepy atmospherics and funky disco basslines that provide the perfect soundtrack to the downfall of Richard Gere's creepy, narcissistic male escort.