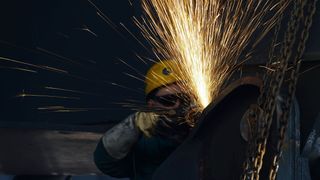 There are endless ways to generate edgy metallic sounds using your computer, from recording or sampling the real thing, to exploiting various forms of synthesis and piling on the effects plugins.

Here are some of our favourites, and you can read more on the subject in the February 2018 edition of Computer Music.

One of the easiest ways to transform any sound into something resembling a mental metallic maelstrom is to sling it through a delay plugin, crank up the feedback and drop the delay time. 0.02 seconds works well, although you’ll want to make sure your delay time isn’t synced to the host’s tempo. This trick provides a retro-style effect that’ll be recognisable to any fan of vintage sci-fi TV. Be careful, though: uncontrollable feedback can damage your speakers, or worse, your ears. Keep the volume level down when attempting this.

The process described above is a down ’n’ dirty way to create an effect known as ‘comb filtering’. A comb filter effects occurs when a signal is regenerated numerous times and played back against the original with some repeats being out-of-phase, thereby cancelling out some of the copies. The results can be visualised as a series of peaks and troughs - hence the name. You can create some very cool dissonant and metallic sounds by running your signals through a dedicated comb filter, such as the free ohmygod! filter that comes as part of cm Plugins.

You might already be aware that the above-described comb filter effect serves as the basis for both phasers and their close cousin, the flanger. In fact, you can achieve a wide variety of whacked-out metallic effects by abusing the various parameters found on any basic flanger plugin. Crank up the depth or intensity, and the feedback, and shove the modulation rate to either extremes. This tactic can be especially effective on drum loops. Once again, you’ll want to watch those levels, though.

If your favourite modular synth offers an old-fashioned analogue sequencer or an LFO with user waveforms, and if that sequencer or LFO can be driven into the audio range, you have a near-perfect modulation source for creating and customising clangorous sounds. Consider treating the knobs or sliders of that sequencer/LFO like inharmonic partials in an additive oscillator, then use it as a carrier or modulator in an FM or ring-modulated patch.

Those sonic sorcerers at Symbolic Sound Corporation have whipped up an interesting new take on modelling with SlipStick synthesis for their lofty Kyma sound design environment. Based on the friction between physical objects, SlipStick synthesis is ideal for simulating the squeaks, squeals, and creaks of metal being scraped, rubbed, bent and otherwise manipulated. As you might imagine, SlipStick synthesis works extremely well with touch-based controllers such as Lippold Haken’s Continuum Fingerboard, Roli’s Seaboard and even a tablet computer. An expensive combination, to be sure, but we’re hoping other developers are inspired to include friction-based algorithms in more down-to-earth products. Learn more about SlipStick synthesis at the Symbolic Sound Corporation website.

At the other end of the price range, Cristophe Duquesne’s SpringSound for iOS offers a mathematical model of the interactions between a set of activators and masses connected to springs. Users can control gravity, bouncing, fluid and static friction and more.

It’s easy to create dissonant sounds with synthesisers and samplers, but there’s another way to create these timbres that doesn’t involve tweaking instrument or effect controls: choosing certain combinations of notes to begin with!

Some composers employ clusters of inharmonious notes to create musically clangorous sounds, while others might simply call upon uncomfortable intervals, such as the infamous tritone of three adjacent whole tones. Sometimes called diabolus in musica (or ‘the Devil in music’), this has been used by composers from Alexander Scriabin to Black Sabbath to invoke sinister moods. One interesting thing about the tritone is that it’s placed halfway through the scale, and moving six semitones down is the same interval as moving six semitones up.

Similarly, using several notes very close to each other (eg, G-G#-A) creates a dissonant chord - known as a ‘cluster’ - which is very in-vogue at the moment. The same cluster will sound different depending on which octave it’s played in, as the notes’ frequencies will clash at different rates. Try it up and down the keyboard.