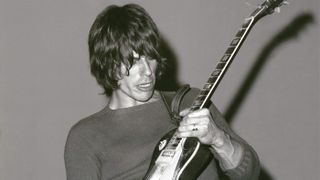 This month, we share a few less common concepts and ideas that you can apply to whichever scales you use.

Hopefully, you will find some of the following examples helpful. Guitarists often like ‘boxes’ and will learn moveable ‘positions’ for each scale related to all of the CAGED chord shapes. This is great, works well and has been covered in depth pretty much all over the place. The same is also true of ‘three-note-perstring’ scale fingerings. These became popular in the 80s with ‘shred’ players, once again work well and have been covered tons over the years also. For these reasons I won’t look at much that uses either of those approaches.

I want to start with an example of a hybrid picked C Major Scale played using as many open strings as possible to create a lovely ‘cascading’ effect. Country players such as Albert Lee, Chet Atkins and Jerry Reed have all used this technique, and essentially any scales that contain notes that could potentially be played as open strings are fair game. Try and find some others yourself. Open string keys of E, A, D and G are the most common. Just remember to let all the notes ring into each other as much as is appropriate.

It’s possible to play a lot of scale-based phrases using natural harmonics. You can play some entire scales such as the A Mixolydian and A7 arpeggio idea shown here, or just add in a few notes as harmonics. Yet again, I would encourage you to seek out others for yourself - Em and G major Pentatonic, for instance. Technically, as you play this example you will need to be accurate with your fretting hand position, and bear in mind that it might be helpful for the highest harmonics to pick slightly closer to the bridge as it tends to make the notes jump out more. For inspiration look on further than Jeff Beck who is a true master of this sort of thing!

Melodic patterns, rhythmic patterns, sequencing and interval ideas are all good for incorporating into your scale practice routine. Another far less discussed idea is what I call ‘note doubling’.

I first heard about this years ago from my old theory teacher David Galbraith, who told me some Baroque composers would deliberately add in some doubled notes into their scale passages. Sometimes this was for valid musical reasons but occasionally it was employed for sheer devilment - as a way of ‘tripping up’ musicians who tended to play scale passages robotically by habit. Try playing any scale you know and pick a note out at random and then play that note twice every time you come to it.

This is a simple idea but technically it’s great for taking you out of scale ‘autopilot’ mode. Plus, you can’t do it effectively if you don’t know the notes on the fingerboard. Obviously it can be expanded to double more notes - it’s up to you. One good suggestion is to double all the chord tones, as doing this will help you learn where they all reside and give them melodic prominence.

Example 4 Open up the string

Moving away from the set number of notes per string idea can really open up the fingerboard. Pentatonic scales played in a 3-1-3 scheme for instance, work great. I show pupils this after I’ve asked them to play any three octave 7-note scale (for example, in the key of A starting on the 5th fret of the low E string and ending up on the 17th fret of the high E).