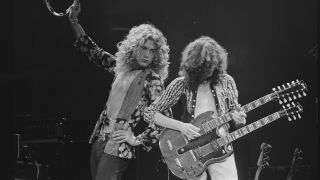 WORLD GUITAR DAY 2019: The idea behind this feature is to have a look at either an artist or a concept and then try to offer a few insights via some cherry-picked ideas.

Hopefully you will be able to use some of these ideas and concepts in your own playing approaches in order to become the best ‘you’ that you can be.

Under the spotlight for World Guitar Day is icon Jimmy Page. All of the examples have been influenced by his work with Led Zeppelin and are all electric guitar based in regular tuning. They are all rhythm-orientated examples.

To our mind, Jimmy has always been a tremendously inventive rhythm guitarist as well as a riff writer supreme and this is often sadly overlooked. One important aspect of his rhythm style is how he often cleverly arranged and orchestrated his guitar parts. In an essentially three-piece band format, a lot of his ideas have rightly become the blueprint for how classic rock should be played.

This idea is simple but it sounds great! We first became aware of it after hearing tracks like Black Dog. All you need to do here is to play an open position A5 chord with a G bass note and then bend G in a downwards direction up to A.

The second chord shown is G5/F# – we're not sure if Jimmy ever played this actual voicing but it certainly uses the same idea as before only this time you only need to bend a semi-tone from F# to G.

Example 2: Behind the nut bending

Behind the nut bends have been employed by country guitarists forever! Often bending by a semi-tone or a tone to create tension and resolution on regular or open string chords. However, Jimmy took doing this to a whole new level.

A great example of this happens in the unaccompanied section of Heartbreaker. In this example we are in the key of Gm and the bend goes up by a Major 3rd from C to E. If you use heavy strings be prepared see a few grooves in your fingertips after playing this. We think it’s worth the pain, though…

This example is similar to Ex 1 in that is was probably employed in order to make the sound of the guitar ‘bigger’ in a three-piece instrumental band.

The little bit of dissonance that is achieved by bending the fretted note slightly against the open string is just a mega-cool effect. The obvious Led Zeppelin reference for this can be found in the main riff of Whole Lotta Love.

Yet again, the idea here results in a bigger sound than would be achieved by just playing the bass line on its own. A very similar phrase can be heard in The Lemon Song.

We would suggest that you play this one either fingerstyle with your right hand thumb playing the bass notes and either your 1st or 2nd fingers playing the open B string ‘drone’. Alternatively, a pick and fingers approach with the pick playing the bass line will also work equally satisfactorily.

For our final example we see a riff that features an alternate picked bassline that has octave jumps in it. The reason we have included this is because there is a slight trick to playing it effectively at fast tempos.

What you need to do is make sure that the A string is muted by whichever finger is holding down the E string bass notes and then when you go to pick the D string notes you actually ‘play through’ the A string almost as though it isn’t there at all – with a downward pick slanting pick-stroke.

The worst thing you can do is to try and pick around the D string and attempt playing it with an upstroke. Not only is this unnecessarily labour-intensive on your picking hand it is also harder to keep in time. The obvious Jimmy Page reference for this sort of thing is in his main riff from Immigrant Song.