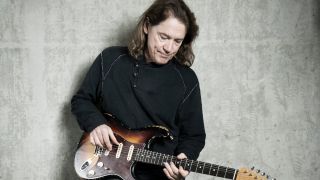 Cutting his teeth in the 70s and 80s with jazz-fusioneers LA Express and Yellowjackets, Robben Ford would go on to become a prolific solo guitarist, releasing numerous albums.

Having also played sideman to the likes of Steely Dan, Joni Mitchell, Miles Davis and Kiss, he can truly be described as the archetypal jazz, rock and blues guitarist.

Often compared to Larry Carlton, Robben plays with a rockier edge. Equally happy with humbucking pickups or single coils, Robben has played a variety of Gibsons and Fenders throughout his career - he’s perhaps best known for his double-cut, twin-humbucker signature Fender based on the Esprit model.

And, though he owns many classic amps (including the supposedly mythic Dumble Overdrive Special), Fender Twins and Super Reverbs are often found in his backline.

Robben mixes fingerstyle with standard picking, generally opting for the latter approach during technically demanding lead work, and using his fi ngers for traditional blues or chord work. Select a bridge pickup and make sure to have both clean and overdrive tones at the ready as you follow this month’s tab examples.

Finally, make sure to dial in a little reverb for that ‘produced’ sound.

Robben tends to play three-note shapes like these using a fingerstyle technique for a snappier, more immediate sound than you’ll get using a pick - try wedging your pick between two fingers when you switch to fingerstyle. Work through the rhythm of this line slowly, remembering to lock in with the light shuffle feel of the backing track.

A more complex take on the previous riff, this phrase uses the same shapes but moves them around to enhance the harmony. For example, in bar 1 we’re starting by playing the notes of the main G chord (G, B and D) before landing on more colourful-sounding C, F and A notes. Note that this is effectively a G11 chord (G B D F A C).

Kicking in some overdrive, this lick is mostly based in the D Mixolydian mode (D E F# G A B C), but with brief moments using F and Ab notes. Known as passing notes, the idea is that you don’t dwell on F or Ab, which, technically speaking, are outside of the key - they’re here to add a brief hit of jazzy colour.

A real blues staple, the opening triplets are left to ring before progressing into a mix of major and minor pentatonics to end the lick. It can help to think of phrases like this as a minor pentatonic idea with a couple of extra notes added, rather than trying to think of two (or sometimes more) scales at once.

Though this phrase may seem an unusual one at first, it’s derived from the minor pentatonic scale, just arranged slightly differently to the average blues solo. Licks like this are great for expanding your lead chops and improv ideas without needing to learn dozens of new scale shapes.