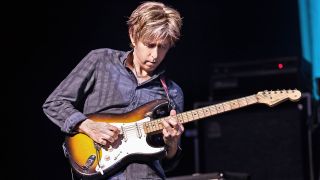 Eric Johnson’s professional career began back in the late 1960s with the band Mariani (he was only 15 at the time) followed in 1974-77 by a stint with the highly respected Electromagnets. After playing in those two bands he then embarked upon a solo career and has never looked back.

One of his greatest successes is without doubt the platinum-selling album Ah Via Musicom, which earned him the Best Rock Instrumental Performance Grammy in 1991 for the stunning track Cliffs Of Dover.

As well as his solo career he has also played on numerous sessions with artists as diverse as Carole King, Christopher Cross, Stu Hamm, Chet Atkins, Sonny Landreth, Adrian Legg, Mike Stern, Steve Morse, John 5 and more - I must mention that a particular favourite guest spot of mine is his version of The First Noel from Steve Lukather’s Merry Axemas album - it’s stunning!

I think you can hear elements of all these musicians in his work, but to my mind, he is the perfect example of a player who, while influenced by many others, still has his own instantly recognisable style.

This point also carries over to his guitar sound/tone and equipment. He is fastidious about every aspect of it and seems to aim for a glassy, pristine clean sound, a fat Keith Richards-esque rhythm tone and an early Clapton ‘creamy’ lead tone.

As usual I have picked a few choice aspects of his playing for us to consider. The illustrative examples range in difficulty from fairly easy to difficult, so be prepared to put in some time to master them!

Eric is also a fine pianist and a lot of his music is apparently written on piano and then transferred onto guitar later. I think you can hear this in the ‘pianistic’ way he approaches his chordal work.

For this example I have come up with a short illustrative progression that contains some commonly used voicings. A lot of them are ‘open’ triad voicings in which the middle note of a regular triad has been shifted up an octave. There is also 3rd in the bass A and D chords and another Asus2 - Am move (bar 16) that involves bending up to the b3rd (C) on the G string while the root (A) and fifth (E) are still being held.

Also notice how I’ve added melody notes in a few places, which is another common stylistic trait. Technically, either a fingerstyle approach or a pick/finger scheme would be appropriate for this piece and don’t worry too much about keeping strict time either - it’s supposed to be played freely with the rhythm/durations given as a guide.

For my video I tried to mimic Eric’s gear as closely as I could. Don’t worry if you don’t have exactly the same gear - a bright/fat clean tone with reverb, chorus, delay and possibly compression added will get you into the right sonic ballpark.

There are three examples contained in this demo track. It kicks off in Ex 2 with a repeating minor pentatonic Zap influenced riff that is doubled by the bass. This should be straightforward and, as long as the timing is right, all will be fine.

The next example on Ex 3 is short and sweet. It does, however, illustrate a pinch harmonic technique that Eric uses all the time. To play it correctly you need to play the arpeggio phrase as shown and then know exactly where on the string to perform the final pinch harmonic. I am sure Eric uses a visual reference whenever he does this technique by first working out where the harmonic ‘node point’ lies on the string in relation to his pickups and pole pieces.

In this instance it is where your 29th fret would be if your fretboard extended that far. Try to do this - it makes good sense and works well. Instances of hybrid picking abound in Eric’s style.

In example 4, you can see an idea that runs from bars 9 to 20 and is reminiscent of the technique used in the verse of the classic Cliffs Of Dover. When Eric plays this sort of thing he picks the bass notes and then uses his right-hand second finger for the notes on both the upper strings.

You could use both fingers 2 and 3 for this if preferable. Also take care to lightly damp the notes with your righthand palm where appropriate, as this will add some percussion and avoid too much handling noise. It should be obvious that the ideas used in this example are all arpeggios of open-voiced chords. The chord names written above each should make it clear as to what is going on musically.

The scale type that Eric is most known for using is without doubt the pentatonic scale - both the minor 1 b3 4 5 b7 1 and major 1 2 3 5 6 1 versions. One of the aspects that he is renowned for is his usage of odd note groupings.

In this final example we have a typical cadenza-style phrase. Notice how after the initial one beat pick up the following bar is phrased using a 5 - 5 - 4 - 2 scheme - the accents illustrate where each of the ‘ones’ fall. This sort of mixed phrasing and particularly the groups of 5 is classic Johnson, and has been copied widely - for instance, Joe Bonamassa admits the influence that Johnson has had on his phrasing.

As you play this it is vital that you don’t think you are playing anything other than 16th notes. It is easy to get disorientated when playing note groups. Also, it is recommended you play this example using legato - as indicated - and use all picking. I have given a suggested picking scheme for this in which ascending the string crossings during the ‘5s’ are typically played using two consecutive down strokes (mini-sweeps) and the remainder is alternate picked.

Eric himself would use a downward-slanted pick motion when playing this sort of idea as it’s motion efficient and lets him cleanly avoid the adjacent strings when string crossing. This is simply because the pick is coming up and away from the body of the guitar and therefore not accidentally digging into any adjacent strings. After you have mastered this example it would be a good idea to develop other ideas of your own in all the pentatonic positions.

Your eventual aim should be to change more-or-less on demand between 16th notes played in groups of 3, 4, 5, 6 and 7, which is actually far harder to do than it might appear on paper. Finally, in common with Ex 3, the last note is yet another pinched harmonic. The only difference here is that the pinch will need to be placed at your ‘virtual’ 26th fret. Good luck!