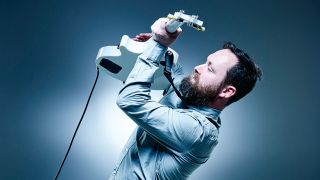 30-day guitar challenge: Plan for the dreaded dropout in your sound when your guitar solo kicks in...

Octaves are played two notes at a time - and we’re using our first and third fingers for each pair, one on the fifth string and one on the third. Mute the idle strings (the fourth string is most important) to play more aggressive strummed scale passages such as the solo in Green Day’s American Idiot.

E minor on the third string with drones

A ‘drone’ is a constant tone that interacts with the main melody. You’ll hear the effect in sitar music and with bagpipes too! Still, it’s easy to recreate on guitar - just use a spare open string over or under your melody line. It allows you to play lead lines, but helps keep the sound full when there are only bass and drums backing you up.

Using this ‘two strings at a time’ shape, you can slide around and make thicker sounding lead lines, avoiding some of the dropout when you stop playing rhythm to go into solo mode. This works when you pair up the sixth and fourth strings and with a fifth- and third-string pairing. The solo in Green Day’s American Idiot is a great example.

The octave shape is different on the high strings - we have to compensate for the lower tuned second string. Remember, it’s a two-string shape. You can pair up the fourth string with the second or the third string with the first. Octaves aren’t as easy or as quick as using single notes but the challenge is worth it for the bigger sound.

These two-string octave shapes all straddle an idle string - and that string needs to stay quiet, otherwise you can expect some pretty nasty sounds! Simply angle your first finger to touch the unused string to stop it ringing out. Once this becomes second nature, you’ll be able to strum quite aggressively at those octaves without fear of unwanted/wrong notes.

Played exclusively on the third and fifth strings, this example stays within the E natural minor scale and features hard strummed octave shapes across a wide range of the fretboard. It’s surprising how much musical space this can fill, but explains why the idea is so popular in the ‘power trio’ format.

Here we’re combining linear playing along the third string with the open first and second strings serving as a ‘drone’ to create a wider sound. A short analogue style delay further enhances the feeling of space. Keep the distortion lower for parts like this so you don’t lose the notes in all the fizz.

5 tips for a bigger sound

If you’re playing long notes over a sparse backing, check that your amp and effects deliver plenty of sustain. If your amp’s tone doesn’t cut it, try out an overdrive pedal such as the Ibanez TS9 and TS808 Tube Screamers or Fulltone’s OCD, keeping the gain as low as possible once your sustain requirements are met. Dial in plenty of midrange and if your tone sounds spiky, try using a compressor for smoothness and more of that all-important sustain.

‘Wet’ effects such as reverb and delay can be a huge help when there is musical space to be filled. Queen’s Brian May is a master at creating massive sounding layers with judicious use of delay in tracks such as Brighton Rock. Try setting up a delay to repeat on every quarter note beat with six to eight repeats - it sounds great on licks that use 16th note rhythms. Reverb fills out sound but too much echo can muddy your tone - there’s usually a sweet spot to be found.

Letting notes ring out together can help deliver a full sound without the dreaded dropout as your solo kicks in. Using an open string or two is the easiest method, technically speaking, but this limits you to just a handful of notes. Albert Lee’s crazy intro to Country Boy is a great example of how those open strings will often work in the key of G major. Just keep a bucket of ice close to hand if you plan to tackle Albert’s fiery licks.

Van Halen’s debut album showcases Eddie’s ability to fill space against a sparse backing. Listen to You Really Got Me and you’ll hear a selection of ideas, from briefly breaking away from the main riff into a flurry of notes to a smartly arranged solo - which isn’t as hard as it sounds. Despite the shred vibe, there’s but one fast lick and it lasts less than three seconds. It’s Eddie’s wide string bends, aggressive vibrato and smooth sustain that ensure the solo kicks you in the gut.

5. A wide spread of notes

Try using notes across a wide frequency range for a broader sound. One easy way to do this is to skip a string in your scale of choice. For example, try making up a minor pentatonic lick that moves from the fifth string to the third and then first strings - you’ll cover more range than staying on adjacent strings, filling out the sound in the process.