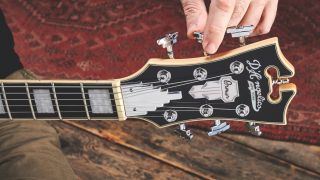 Sometimes you have everything you need to play and sound better on electric guitar at your fingertips.

Here, We look at some simple ideas that can expand or improve your playing...

Many great players have tuned a half step down – from our lord and master Jimi to SRV, Jerry Cantrell and Slash.

But why? A darker and heavier sound is an obvious trait, and as a band it makes you sound bigger. You may find it opens up more songs as a vocalist, too – making high notes easier to get to (many bands tune down as their singers get older to lower the key – Whitesnake being one).

You’ll need to consider whether you need to go up a gauge when you tune down as it will affect intonation. Some players may prefer the looser feel – especially for easier bends. Remember though – playing in Eb (D#) or D (whole step down) will affect your bass player and fellow guitarists too, and your bassist may choose to transpose if it’s only a couple of songs you’re tuning down for.

Extra tip: Want to play in standard again? Put your capo on the 1st fret if you’re half a step down or 2nd if you’re a full step down.

We’ve all heard of drop D tuning, right? This is an interesting addition to that old favourite: Double drop D. Simply drop your high E down to D, too. It’s not just a metal move, and works especially well on acoustic.

Neil Young’s Cinnamon Girl, The Doors’ The End and Zeppelin’s folky Going To California are three classics that utilise it and Craig Finn uses it in The Hold Steady. Indeed, dropping your high E can be good for slide blues parts.

3. Use volume controls as boosts

You can control your gain without touching a pedal. Here’s how...

4. Get your pickup height right

Your pickups are the heart of your guitar’s sound, so it’s vital you set their height right to get the best out of them. The closer they are to the strings, the louder they will sound. But louder doesn’t necessarily mean better. For humbucker height, start by fretting the top and bottom E strings at the final fret. Using a steel rule, adjust the humbucker’s height until its treble and bass sides both sit evenly 2.5mm beneath the fretted strings.

A Strat-style single coil should be adjusted to sit with the treble side slightly higher than the bass for a good balance. Again, fret the two outer strings at the final fret, then adjust the pickups so the pole piece tops sit 2.5mm and 3.5mm from the treble and bass E strings respectively. But watch out for wolf notes – these occur when the pickup’s magnetic field is too close to the string’s field of movement, preventing it from vibrating naturally.

Because strings vibrate more freely near the neck than at the bridge, neck pickups sound louder for a given height. We’d advise experimenting with height settings for pairs or trios of your pickups to establish a good balance in volume when switching between them. Adjustable poles allow you to fine-tune things further.

Before you know what you want from a new pickup, you first need to understand some fundamentals about them. Here’s Bare Knuckle Pickups chief Tim Mills with some essential points to remember when shopping for new pups:

Pickups are about frequencies

“You’ve got to remember that a pickup doesn’t generate frequencies, it reproduces them very much like a microphone. I think that’s a mistake a lot of people make. They tend to think that, ‘I’m going to use X pickup because it’s going to give me more bass’. Well, the pickup itself won’t generate that, because nothing comes out of it until a string vibrates in its magnetic field. So, it’s about what frequencies does that pickup listen to?”

The magnet influences the tone

“This is very important; the two most common magnets used in guitar pickups are Alnico and ceramic. They reproduce very different tones from a guitar when used in a pickup. Alnico, as a general rule, always produces a fuller, warmer tone with pronounced mid-range and sweeter highs. Ceramic, by comparison, produces a much brighter high, smoother mids and tight fast-tracking bottom end.”

“As a general rule, most players that use a lot of gain, and a lot of volume, will be better off with a potted coil. Anything gained by dynamic sensitivity in an unpotted coil is generally lost at that kind of volume level anyway. But for the pure tone-hounds, an unpotted pickup does give you this touch-sensitivity; it gives a more vocal tone and arguably a little bit more high-end as well.”

Low output pickups have their advantages

“If you overwind a pickup or use a magnet that is too strong, all the high end gets rolled off. That leaves you with a tone that is dynamically unresponsive and lacking in any sort of definition. Ultimately unusable. With a proper selection of wire gauge and magnet it is possible to get extremely high output from pickups, while retaining a good degree of clarity, although the higher in output you go, the more compressed the tone gets. A lot of people don’t realise lower-powered pickups can work really well in applications usually reserved for high-output pickups.”

“When it comes to putting covers on pickups, the cover material will probably be of more importance than anything else. Using brass as your base material – which is an easy material to draw into a deep cover – can create a lot of extra capacitance. In other words, it knocks a lot of highs out. Change to nickel and that effect isn’t anywhere near so pronounced, but it’s a much harder material to draw in a tool.”

“The bottom line is you get a better dynamic response from the coil. Most people who play a hand-wound pickup say it sounds more ‘open’. It’s easy to make a pickup sound brighter but to have a truly open voice it’s got to be dynamically responsive – and that’s what scatter-winding [intentionally irregular hand-winding of a pickup coil] does. Also, compared to a machine- wound coil, the frequency response is slightly extended. So the sound is bigger and you hear more not just in the high frequencies but also in the depths of the frequency response.”

If tone is in the hands, we need to make sure we’re getting that part right – from experimenting with different kinds of plectrums and not just sticking with the same old, to questioning the way we hold them for different applications...

Plectrum: This is about precision. Hold your plectrum so only the very tip is visible.

Hand: The ideal place is to rest your hand on the bridge with the plectrum positioning to touch the string you want to play. Keeping your hand movements at a minimum is vital to reducing string noise.

Plectrum: Strumming requires a wide hand movement, as you’re covering several strings on every stroke. Let more of your plectrum show for that flappier sound of pick on string.

Hand: In general, your plectrum should touch the strings halfway between the bridge and the end of your fretboard. So to add more treble to your sound, strum closer to the bridge.

Plugging into a tuner? Use your neck pickup and roll your tone right down. You’ve now reduced many of the overtones that can interfere with electronic tuner accuracy and created a clearer signal.

It’s a sad fact that many of us will very rarely touch the tone controls on our guitars. But it’s an instant low-pass filter to change its personality; bright to warm, thick to thin. Because sometimes guitar players need to back off, it’s a quick way to reduce your treble or round out your overdriven tone. Make sure to give it a try!

9. Pro tip: Use a Bigsby on chords

They’re not just for rockabilly licks, you know! Both Pearl Jam’s Stone Gossard and the late, great Chris Cornell are players who introduced them to their rhythm roles.

“It ended up being something that I really, really appreciate,” says Stone. “And I think the main reason why is even as you play less and as you deconstruct your parts for songs, you’re hitting chords and just as it’s dying out if you can give something – the chord can still speak in the part. But it doesn’t have to do anything more than a little wiggle. They’re a really expressive kind of tool that isn’t like the divebomb tremolo either.”

There’s some clear gains to be made by an electric player picking up an acoustic regularly; you’ll build finger strength that will benefit your vibrato, and it’s a great way to learn to play riffs cleanly. But most of all, it’s great for strumming. As Opeth’s Mikael Åkerfeldt says...

“It’s important to be able to strum properly. Give an acoustic guitar to a shredder and ask him to strum on an E major and see how it sounds. A lot of them are going to fail miserably.

“You need that kind of smooth, calm strumming like David Gilmour. You learn a thing or two if you go back to your electric guitar after studying acoustic guitar.”