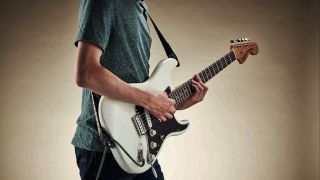 Adding a few choice notes to the basic major, minor and powerchords you already know adds flavour and can help fill out your sound.

Here are 10 tasty shapes to help you create the slick-sounding rhythm parts of your favourite players.

If you add an F# note to an E chord the expansive sounding Eadd9 is produced. Guitarists like Andy Summers from The Police have used chords like this to great effect.

Start with an Em shape this time and add the F# note for the minor version of the add9 chord. It’s equally lush sounding, but with a darker, mournful vibe.

Add a D note to a C5 powerchord and a Csus2 chord is produced. It works well with a clean or light overdriven tone, strummed or as an arpeggio.

Dadd9add11 has a cool dissonance due to the open third string being only a semitone from the 3rd interval on the fourth string. Great with jangly clean tones.

This is one of several easy changes you can make to the good old open C shape. The name tells you that you’re simply adding in an 11th interval – an F note here.

As the name suggests, add 6th and 9th intervals to a D chord to make D6/9. It’s heard a lot in rock ’n’ roll, country, rockabilly and it’s a great sound to finish a jazz progression on.

This chord is a little tricky to finger, but it is well worth the effort. It can be moved anywhere on the fretboard and sounds great in the higher registers.

This chord sounds super in blues and funk styles and is easy to play. When strumming, make sure to mute the fifth string by lightly resting a fretting finger against it.

The Em11 sounds huge. The open sixth string adds weight but isn’t essential, so you could move this one around the fretboard using the fifth string as the root note.

Often referred to as the Jimi Hendrix chord, this shape is synonymous with funk-rock and aggressive blues-rock. In E you can add the open first and sixth strings for breadth.