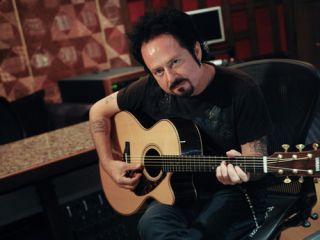 From the Guitar Techniques archive, we ask a great guitarist all those little questions you really do want the answers to. Here's Toto guitarist and all-round session legend, Steve 'Luke' Lukather...

GT: Do you have a type of pick that you can't live without?

SL: I have been using small teardrop jazz picks since I was like 14. Love the smallness and I also use my fingers as well. They are heavy but non obtrusive. They just feel good in my hands. A normal pick feels alien to me, like I am holding a dinner plate in my hands - hahaha.

GT: If you had to give up all your pedals but three, what would they be?

SL: I would use a distortion box (LOVE Radial and T-Rex and Tube Screamers) and a delay and well, the rest is a wild card depending on the situation…

GT: Do you play another instrument well enough to be in a band?

SL: Yeah, I play keyboards and have played on many a Toto record. And bass. I played on Beat It, and Talk To You Later by The Tubes; some Toto stuff and others. I can lay a good groove down on the drums - I'm not Billy Cobham but I have recorded stuff where I play everything - I might try it on a tune or two for my next solo record just so I can say I did!

GT: If a music chart was put in front of you, could you read it?

SL: Yes. 35 years of studio work will do that to you. I can't sight-read classical etudes - I would have to see it and learn it. But yeah, I can read. It is a wonderful tool. It's like speaking another language. Anyone that says reading music can hurt your playing is either stupid, lazy or ignorant.

Now, having said that, some awesome players never read so reading is a tool not a prerequisite…

GT: Do guitar cables really make a difference? What make are yours?

SL: In the studio yes. Live I like the freedom of wireless. When you are playing live by the time the sound hits the audience it is tainted anyway and it gets in the way. But I use cables only in the studio for the obvious reasons. I don't have a special cable. I have tried them all and some are great but I am too old and lazy to mess with that fanatic shit. I am still learning to play the guitar - hahaha!

GT: Is there anyone's playing (past or present) that you're slightly jealous of?

SL: Jealous no. Envious and a fan, yes. It doesn't get better than Jeff Beck and I had the great honour of playing with him and working with him. But there are so many people in all styles. It's like asking which of my kids I like the best.

GT: Your house/studio is burning down: which guitar do you salvage?

SL: My 1959 sunburst Les Paul as it is worth almost a million bucks. I have photos of Geroge Harrison playing with me and it has been on a lot of hit records. But I keep my Music Mans and all my other 300 guitars in storage. It's the vintage stuff that has the most resale value, but I am a Music Man guy 1000%. You gotta try the BFRs. Unreal!

But as collectors we all know the value of, say, my 1951 Esquire…

GT: What's your favourite amp and how do you set it?

SL: Oh jeez. I love my Bradshaw three-channel preamp through a VHT power amp, but in the studio it could be a Marshall, a Supro, Magnatone, Vox AC-30. I will try anything. I got into the boutique amps on my latest record, Ever Changing Times, and you can hear the tone differences. It makes you play differently, which is always cool.

GT: What kind of action do you have on your guitars?

SL: Pretty stock. I don't believe that heavy strings make it all that much bigger sounding. If anything it can mess up your fingers and you can get tendonitis, which is not cool. But I do practise only on acoustic guitars with 11s or 12s on top to keep the chops up.

GT: What guitar strings do you use?