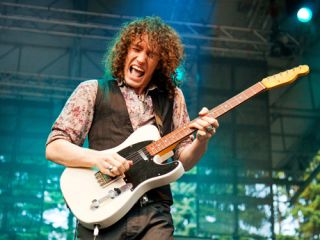 We sit down with a famous guitarist to ask those little questions you've always wanted the answer to. This time, bluesman Oli Brown…

Do you have a type of pick that you can't live without?

Fred Kelly Bumblebee XH. It's a hybrid thumbpick which I swear by.

If you had to give up all your pedals but three, what would they be?

My tuner, Wampler Ecstasy and my Exotic EP. I don't use any pedals on my current amp as it gives me what I need (apart from the tuner) but when I'm on tour using other amps I can't go without my Exotic and Wampler pedal.

Do you play another instrument well enough to be in a band?

I like playing the drums - awful at it - but it's sometimes fun to just hit things.

I could read it. I wouldn't understand what it's trying to tell me though.

They do make a difference. We have the proof in the studio. Recording some bass with an Elixir expensive lead then with a standard lead there was a definite sound difference. The frequencies of the bass responded better with the Elixir. Whether you'd notice it live or not...

Is there anyone's playing (past or present) that you're slightly jealous of?

I'm not jealous of anyone's ability. I'm inspired by lots of people but there's no point being jealous, as I'm not going to learn much from them like that. I learn by listening to the players I like and learning what they do.

Your house/studio is burning down: which guitar do you salvage, and why?

My Vanquish Legend. It's been a huge part in my whole touring life and I have a lot of history with it.

What's your favourite amp and how do you set it?

My Volt Super Overdrive. Treble 4, Middle 7, Bass 4. It changes sometimes depending on the guitar but the beauty of this amp is that you can just plug another guitar in and you're guaranteed to get a good sound out of it - a truly special handmade amp from Birmingham.

Geoff Pugh (the brains of Volt Amp Co) is a genius. It has a FET boost built inside and footswitchable with a volume control so I can add some extra volume boost and gain. Also a great gain channel removing any need for a drive pedal for me. It's great to use the natural amp.

He's a reasonably new maker and bases his amps on the legendary Dumble amplifiers. I think it's spot on, we've A/B'd a few amps to compare and it's just amazing.

High action on them all. I like the fight of a high action.

What guitar strings do you use?