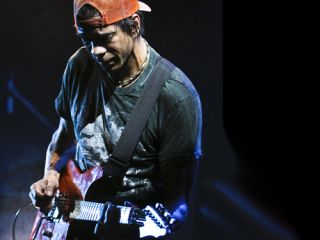 From the Guitar Techniques archive, we ask a famous guitarist all those little questions you really do want the answers to… This time, the unspeakably excellent Greg Howe.

Do you have a type of pick that you can't live without?

If you had to give up all your pedals but three, what would they be?

Do you play another instrument well enough to be in a band?

I could probably handle bass in a lot of band scenarios.

Yes, although probably over the course of many weeks. I really can't sight read to save my life.

Guitar cables do make a huge difference; the cables I currently use are by a company called Lava.

Is there anyone's playing (past or present) of which you're slightly jealous?

Your house/studio is burning down: which guitar do you salvage, and why?

I would salvage the one I could most easily access at the moment, to be quite honest. I don't really have favourite guitars, they're all equally valuable to me.

What's your favourite amp and how do you set it up?

My favourite amp right now is the original Cornford MK50. Both gain knobs are generally at about 2 o'clock; bass is at about 10 o'clock; mid is about 12 o'clock; treble and presence are about 10 O'clock.

There are many variables which will often lend themselves to considerably different EQ configurations, such as age of tubes, the guitar etc. The output volume also plays a significant factor in the overall tone and response, however it varies from venue to venue and scenario to scenario, which is why I often use an attenuator.

What kind of action do you have on your guitars? We're assuming it's low!

My action would probably fall under the category of low, but it's not micro-low; I do like to feel and get under the strings a little bit.

What guitar strings do you use?

I use D'Addario EXL110 because they are a light gauge, but generally thicker and punchier than .009s without presenting me with quite the physical challenge, regarding bending and vibrato, that I'd be faced with using .011s. It's a nice balance between tone and playability.