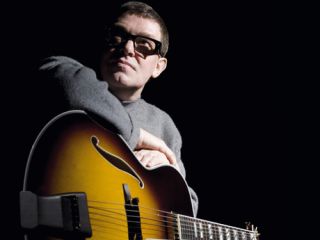 From the Guitar Techniques archive, we ask a great guitarist all those little questions you really do want the answers to. Here's Be-Bop Deluxe founder and solo musician Bill Nelson…

GT: Do you have a pick that you can't live without?

BN: It depends on the style of music I'm playing at any given time. I use Pure Tone picks quite often but I also have several special picks made of ebony, rosewood, bone and metal that I bought in Tokyo. They're very thick, heavy gauge ones but they add a lot of body to the tone of the guitar. Perfect for my heavily strung jazz archtop guitars.

GT: If you had to give up all your pedals but three, what would they be?

BN: I use three rack-mounted digital multi-effects processors: a DigiTech Valve FX unit, an old Zoom 9050-S processor and a Line 6 Pod version 2. I also have a Line 6 Delay modeller and a Boss Loop Station.

If it had to be cut down to one, the Pod would probably cover me for most things. I've got it programmed with my own sounds and have recorded with it for several years now.

GT: Do you play another instrument well enough to be in a band?

BN: I play bass guitar, keyboards and drums. I could handle bass in a band and perhaps keyboards. I've played keyboards for bands that I've produced.

GT: Could you read a music chart?

BN: No, but I could turn my guitar volume down to zero and pretend that I was reading it! I'm from the generation that learned to play by listening to records. I have no formal, academic understanding of theory but I get by.

BN: Microphonic, unshielded pickups and an amp with lots of hum and hiss won't really be improved by hooking them up to a high-end, expensive cable. My main cable is a Rosetti Ultrapure Sound Series Silver. I've had it for several years and it serves me very well.

GT: Are you jealous of anyone's playing and why?

BN: There are so many guitarists that I admire or feel in awe of. But if you want to bring pure and evil jealousy into it, then I'm at the head of that long queue of guitarists waiting to 'accidentally' stand on Jeff Beck's hands. Just colour me green with envy.

But I did beat him to the post with that electric guitar meets techno, drum and bass sampling thing. So, nya-na-na-nya-na, Jeff!

GT: Your house/studio is burning down: which guitar do you salvage?

BN: I have some absolutely wonderful guitars that I genuinely treasure. It would be impossible to choose just one to save. Nevertheless, if push came to shove, I'd grab my Gibson ES 345 STD, mainly because of its sentimental value.

My late father bought it for me in the early 1960s and I used it on the majority of Be Bop Deluxe's albums and tours. It's sort of retired from day to day work now, although I occasionally give it an airing, but I'd never, ever part with it.

GT: What's your favourite amp and its settings?

I use the digital processors mentioned above for my solo concerts, going straight to the PA system, everything in stereo. But, when playing with a full band, I'll add in my custom-built Carlsbro Nelsonic 50W amp and matching 4 x 12 cab. I based it on Carlsbro's 50 Top Evolution head.

Settings vary from number to number and venue to venue.

GT: What kind of action do you have on your guitars?

BN: I like the action as low as possible without it incurring buzzes or killing the tone. Some guitars are always going to be a little easier to play than others but the contrasts are good and keep me focused.

GT: What guitar strings do you use?

BN: On the solidbody guitars I choose Ernie Ball Super Slinkies, 009 to 042. On my archtops I'll use a skinny top, heavy bottom set. On my Peerless Monarch Jazz archtop I prefer a heavier gauge, 012 to 053.

Intonation and tone are always better with the heavier strings, but they can be harder work than the lighter gauge sets, though that's not necessarily a bad thing is it?