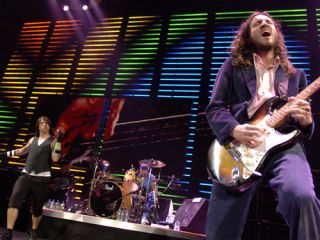 Song: Under The Bridge

If you play the major 7th interval as two notes (say C and B in the key of C) it sounds a dissonant, ugly mess. But introduce the 3rd (E) and 5th (G) between them and the sound becomes beautiful and dreamy, creating a chord that's often used to evoke love or melancholy in music.